It is an ideal Bangkok airport hotel if you have a short layover, either between flights from the airport of if you have a domestic connection from Koh Samui or Krabi airports. 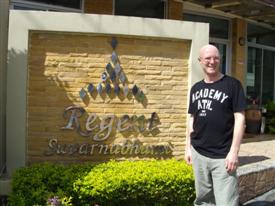 After passing through immigration at Bangkok Airport and collecting my baggage from the carousel and I proceeded out via the Customs Green channel to find the hotel agent.

As you enter the arrivals hall and pass the AOT Limousine counter on the right, there are hotel representatives from the large 5-Star Bangkok hotels given pride of place on the other side of the barrier rail.

Here you will find agents for the Marriott, Intercontinental, Westin and Sheraton Grande hotels.

I kept walking slowly just looking at the boards on display until I came to a point opposite Gate 4 and there I saw the Regent Suvarnabhumi Hotel guest board with my name on it.

The agent ushered me to the other side of the barrier and pointed to some seats, saying "Wait there, 10 minute, 10 minute" as he made a phone call to the van driver.

I thought to myself, "May as well start the stopwatch on my mobile phone and just see how long that this all takes".

Normally I don't get chance to sit around in this part of the airport and people watch. So I spent the next few minutes just observing the passengers getting off the plane and seeing who was meeting them.

You can see the people whose driver has not turned up, those who have discovered that their luggage will not fit in the car and then there are the happy couples reuniting after a separation.

After 14 minutes the agent beckoned me over as the van had turned up.

I was escorted outside and within 15 minutes we were leaving Suvarnabhumi Airport and heading for The Regent Suvarnabhumi Hotel on Ladkrabang Road.

It was 5:15 pm on a Friday afternoon and as we turned onto Ladkrabang Road I could see there was a quite a bit of traffic.

After few minutes I noticed that the delay was caused by a three-car nose to tail accident.

No serious damage was done, but in Thailand if you have an accident you must wait for the insurance agent to arrive to inspect the scene before the vehicles are moved.

The Regent Suvarnabhumi Hotel was just a few hundred metres further along past the accident and we turned left into Soi 22 and drove past The Ivory Suvarnabhumi Airport Hotel (that I had visited two weeks prior) and then drove another 100 metres into the Soi before turning into the hotel grounds.

The check in procedure was pretty swift and I handed over my Agoda hotel booking voucher the the receptionist.

She was very pleasant, spoke good English and actually on the next day she gave me directions to the Airport Link station at Ladkrabang that is only 5 minutes away by car. 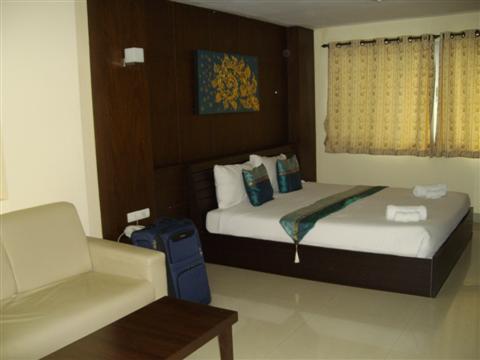 The building has nine floors, is fitted with lifts and I was shown to my room on the seventh floor.

Total time from airport to actually being in the room was 30 minutes, which I thought was good given the slight traffic delay we encountered.

The Regent Suvarnabhumi Hotel is an apartment building converted into a short stay hotel and my room was a good size and was tastefully decorated. 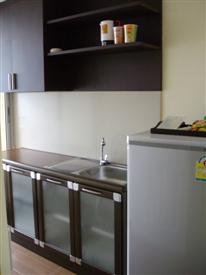 There was a sofa, flat screen TV, a small writing desk and some cupboard space.

Adjacent to the door was a small toilet and shower and then next to that was small kitchen that led out onto a balcony area.

Smoking is not allowed in the rooms but it is allowed on the balcony area.

So if you are a smoker you are going to love this place, as you will no longer need to go downstairs and outside like in most hotels.

From the balcony there was a view of the car park below and the room looked directly into another apartment block across the way, so there was little privacy unless you drew the curtains.

There is no personal safe in the room, but down at reception I saw four or five safes behind the desk, large enough for your diamond tiara or precious gold bullion, but not big enough for your laptop I suspect. 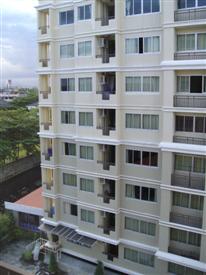 So what was it like to spend a night?

Well the bed was firm but comfortable and the air conditioner worked well and was not noisy.

The curtains did not block out the light and as there were spotlights illuminating the building there was a fair amount of light coming in, even after the main spotlight was turned off.

During the night a car alarm was set off in the car park below, this went on for a few minutes, but enough to wake me up.

I think the worst feature of the Regent Suvarnabhumi Hotel was the noise of other guests leaving.

This was mainly because when you leave the room it is necessary to set the lock on the handle and pull the door closed hard to lock it. 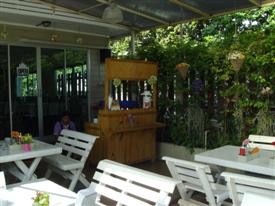 Consequently whenever a guest left for the airport there was this loud banging noise that reverberated throughout all nine floors of the building.

This seemed more obvious from about 4:00 am onward as everyone left to catch their early morning flight.

So all in all with the jet lag and the general noise I got a fairly disrupted night’s sleep.

The next morning I went to have breakfast at the restaurant, which is located at the rear of the car park, in a nice little undercover area.

The breakfast was included in the room rate and there was a choice of Set A or Set B.

Ham, egg, tomato, sausage, orange juice with tea and toast for Set A and Set B was without the meat but probably a bit more of something else. 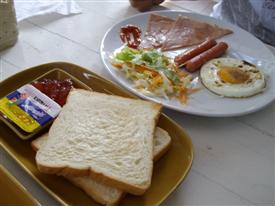 If you had not included breakfast in your room rate then you could purchase either set for 120 baht.

The breakfast was just sufficient to fill you up until you got back on the plane and could eat again.

There was no Thai option for breakfast; I was told that for the Thai option you had to wait for the cart on the street to open.

This hotel is within 10 minutes of the airport, but importantly it is not under the flight paths of any of the airlines like some of the other airport hotels.

Located about 200 metres away from the Regent Suvarnabhumi Hotel is the Paseo Mall. 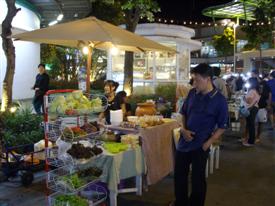 Here there is a choice of fast food restaurants or Thai restaurants, where you can go and eat.

From about 3:00 pm the night market sets up from Thursday to Monday and it is an interesting place to wander around.

During the cooler months of November to January they have a beer and music section around the back.

In the building opposite to the Hotel they have a massage service on the left hand side of the ground floor.

I didn't try this out because I went back to the Massage and Spa in the Ivory Suvarnabhumi Hotel just up the street that I had enjoyed so much on a previous visit.

Near the entrance to the Soi I noticed a sign indicating that there was the use of a swimming pool for non-residents, somewhere further into the soi.

This may be of interest to some as I believe that it is at the Paragon Hotel.

The Latkrabang station for the Airport Link is nearby (it wouldn't be more than 45 baht in a taxi to get there).

The ARL link will take you directly into Pratunam, the main down town market area of Bangkok. (Probably defeats the purpose of staying near the airport, I would have thought).

The hotel has an onsite restaurant and the room comes with a kitchen and balcony.

Great if you are a smoker or would like to do a bit of cooking.

The room was larger than just the normal bed sitter and had a sofa and large flat screen TV.

Airport pick up was organised and convenient. 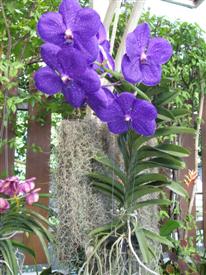 In reality you would only stay at this hotel because you have a Bangkok layover of 5-10 hours.

If it were less time you would stay inside the airport and if it were more, you would probably go into Bangkok.

Overall the transfer to the Regent Suvarnabhumi Hotel from the airport went smoothly.

I liked the room and its proximity to the airport and the Paseo shopping centre.

I did find it noisy because of the other guests coming and going and the lack of blackout curtains made the room very light and this may be a concern if you wanted to sleep during the day.

There was no Thai option for breakfast so this is probably going to appeal less to Asians than Europeans, but for many early morning flights you will be up and away before breakfast anyway.

I think the Regent Suvarnabhumi Hotel is an entirely acceptable hotel choice.

It has a balance between cost and amenity and it is suitable for those people looking for a cheap alternative to the 5-Star accommodation at the airport. 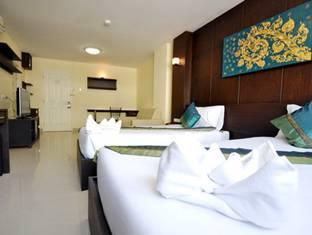 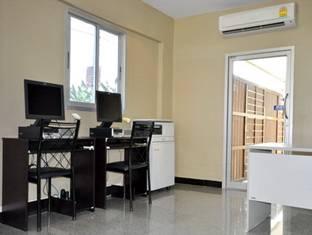 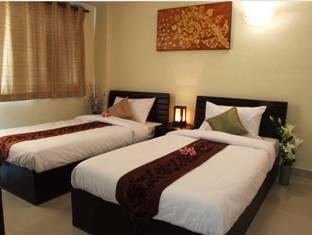 You can book the Regent Suvarnabhumi Hotel and read more guest reviews on Agoda and make the most of your Bangkok Airport layover.