Sai Kaew Beach is the most popular of the Thailand beaches on the small island of Koh Samet and is a popular destination for people staying in Bangkok. 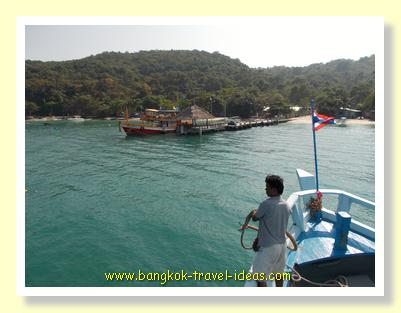 The sand is fine and the water crystal clear and there is now more to do than ever.

How to Go to Koh Samet from Bangkok

There are four options for getting from Bangkok to Koh Samet and the choice is very much depending upon how much time you have and your budget.

Read through all the travel options and choose the best combination based upon your circumstances.

To avoid any delay upon transfer to mainland, please be ready at the lobby 30 minutes before departure time for check-out.

The last time I went from Ban Phe to Koh Samet it was in a rough sea and the ferry tossed wildly from side to side.

It was nearly impossible to walk on the deck and take photos approaching the island; but that was six years ago.

Today the sea was almost calm as the boat chugged its way towards the palm-fringed beaches of Koh Samet.

The ferry ride had only taken around 30 minutes from the Samed Group office next to Seree Ban Phe pier and most people were trying to get a good view of the island as we came closer to shore. 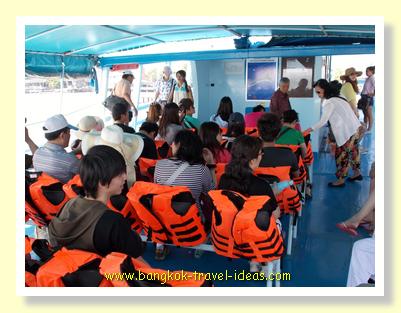 I took the chance to get some photos as we pulled into Ao Klang pier.

At first glance it was pretty much as I remembered it, but in the distance I could see a new pier jutting out from the shoreline.

Na Dan is now the main arrival point for the other boats from Ban Phe and is distinguished by a large female giant at the end of the pier;  Pisuea Samut (Butterfly of the Sea).

The ferry captain threw the boat in reverse as we approached the pier and with a roar of the engines we gracefully slid alongside.

The ropes were tied off and the boat came to rest.

Everyone was eager to disembark and see what lay ahead. 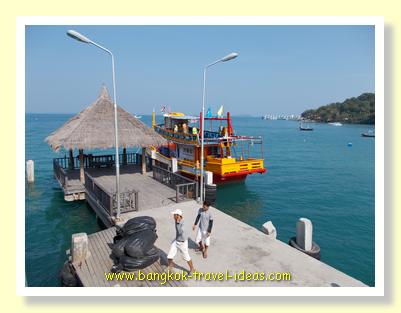 It was just a short walk to the end of the pier and we sat down in the coconut thatched waiting area, which made a welcome relief from the sun.

Late December has great weather in this part of Thailand and although there was a nice breeze, it seemed quite hot on shore and the shade was very cooling.

The baggage was unloaded from the ferry and put into piles; each hotel had its own tag.

All around us, groups of Korean tourists were being herded into Songthaews and transported to their hotels.

Our turn would come.

We didn’t have to wait long.

After about 10 minutes or so, two more Songthaews arrived; our bags were loaded into one and we got into the other. 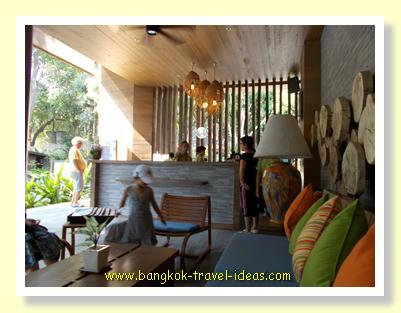 I was the last one to board and made the mistake of not sitting down immediately.

The driver set off with a jolt and almost upended me over the back rail onto the road.

Luckily a couple of people grabbed me and I quickly sat down as we made our way to Sai Kaew Beach Resort.

The Resort is just a few minutes ride away and as we came into the village I noticed that there were many more shops and places to eat than on my last visit and there still seemed to be lots of construction work going on. 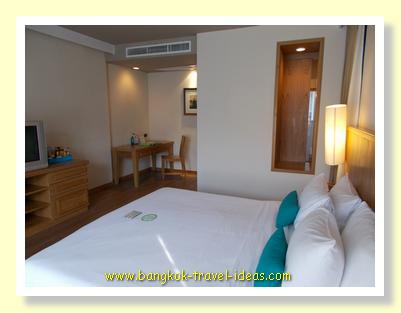 As the Songthaew turned into the grounds of the Sai Kaew Beach Resort I could see the recent expansion and the new buildings.

It certainly had changed, with a new reception area and a couple of new wings added.

Just opposite the resort is a Buddhist Temple that I had visited previously. I made a note to go back and get some better photographs.

The room wasn’t quite ready, so we completed the check-in formalities, drank the welcome drink and waited a short while before being shown to our room. 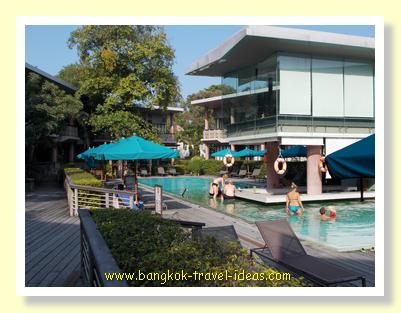 The receptionist came along with the key and beckoned us to follow.

The room was just past the Spa and opposite the new swimming pool and was on the lower level, so it was easy to get to.

Ten minutes were spent putting clothes away and getting a bag ready for the beach and then it was off to the beach.

There were two beach towels in the room and a special calico beach bag to hold them, so that was handy. 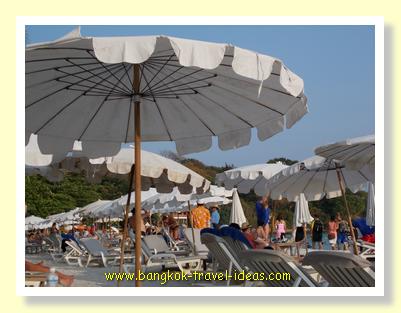 To get to Sai Kaew Beach we walked back past the Spa and Reception, through the new breakfast and restaurant area and down onto the sand.

It still wasn't high season but there were a lot of people on the beach, in fact many more than I expected.

There were three rows of lounge chairs and umbrellas.

Most of the chairs looked like they were occupied so we got the beach staff to set up two new chairs and an umbrella so we could sit and relax a bit. 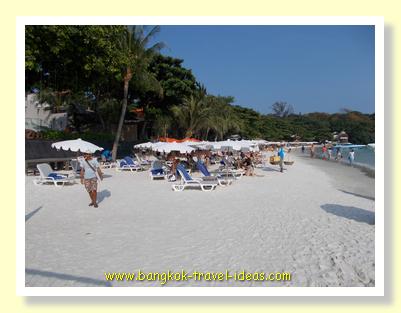 Every so often beach vendors would come by with a selection of food.

It is great to get on the beaches near Bangkok and just gorge on young coconut, boiled eggs, barbecued seafood and more.

Down the beach I could see a Roti cart like the one seen in Koh Chang and in the distance were speedboats loading up with passengers going on the snorkeling tours.

Out in the bay there were people gliding about in the sky being pulled by a boat, there was even the odd banana boat and Jet Ski in use.

There seemed to be a lot going on, whichever direction I looked. 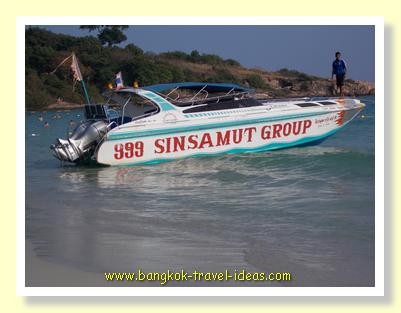 Now was the time to sit and relax and just take in the beach atmosphere.

Later in the afternoon when the sun started to get lower we walked along the beach.

The tide was quite high by that time and towards the middle of the beach the water was almost lapping up to the beach chairs.

As I walked along with the sand squeaking underfoot I still recognised some of the resorts and of course Ploy Talay pub and restaurant was still there. 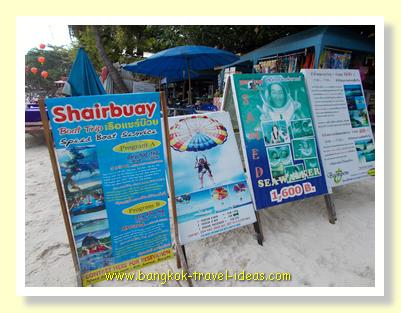 Because of the high tide most of the beach was taken up with chairs.

The shady area where the ladies used to perform beach massage had disappeared in a sea of umbrellas.

The empty blocks of land adjoining the beach front had all been consumed by new resorts and cheap accommodation.

Sai Kaew Beach is a few hundred metres long and extends all the way to the rocks, where the mermaid statue is located.

Make sure you get some photos next to the statues.

Early morning is the best time; otherwise the sun will be in the wrong position.

The statues are taken from the poem by Sunthorn Phu, one of Thailand’s most famous poets. 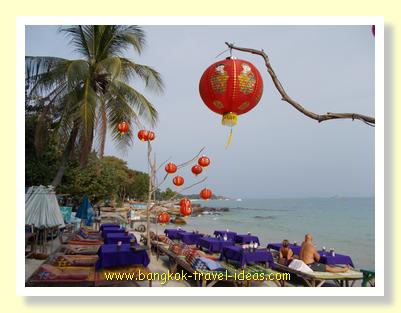 On the other side of the rocks is Ao Hin Hok and this beach extends all the way to the next headland.

The sand is just as white and fine on this beach, but it was noticeably quieter and there were still blocks of bush land that had not been developed and there was more of a relaxed atmosphere in this area of the island.

We walked along splashing in the water all the way to the end and looked back to where Sai Kaew Beach Resort was located.

Koh Samet night life is fairly casual and as we walked back the tables and chairs were being set up for the on-beach dining.

Dining out on the beach is one of the great things to do on Koh Samet and more than likely you will find yourself near the Ploy Talay Restaurant and Pub.

Around 8:00 pm nightly they have the famous fire show for the enjoyment of patrons and people passing by.

The place is always packed out and the grilled seafood is delicious and as an added bonus you get the free entertainment.

If this Bangkok island sounds like the sort of place you would like to visit for a few days, then make an Agoda booking for the Sai Kaew Beach Resort.