Asiatique the Riverfront has been on my list of places to visit now for a while and unlike many places in Bangkok it is relatively easy to get to.

Asiatique the Riverfront by Shuttle Boat

If you have a short vacation in Bangkok, then set aside one evening to visit this up and coming tourist attraction and don’t forget to take your camera as you are bound to get some great images of the Bangkok riverside area. 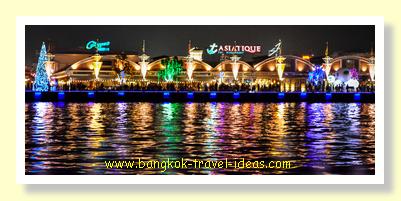 Asiatique the Riverfront is touted as the biggest lifestyle project on the banks of the Chao Phraya River and consists of shops, restaurants, bars and an outdoor theatre.

The remaining land will be developed later. 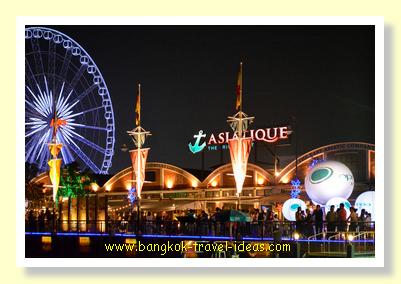 How to Go to Asiatique by BTS

How to get to Asiatique the Riverfront by BTS?

There is parking for 2000 cars, but for most visitors to Bangkok the easiest way is to take the BTS to Saphan Taksin station and then take the free shuttle boat to Asiatique.

This is the way we did it.

The Asiatique Bangkok complex is open from 17:00 - 24:00 each day and we left home around 17:00 and took a Songthaew for the grand price of 7 baht directly to On Nut BTS station. 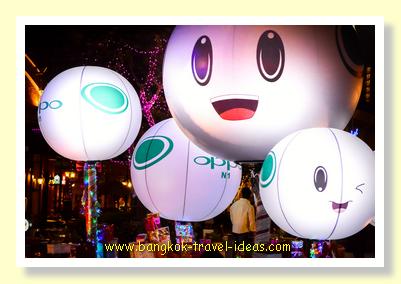 From On Nut station the ticket to Saphan Taksin costs 42 baht, this journey involves a change of train at Siam station and took 25 minutes.

There was a few minutes wait at Siam for the connecting train and we had to battle the office workers coming home from work and get in line for the next BTS train, but it was fairly straightforward.

At Saphan Taksin BTS station follow the signs showing which exit to take, and head towards the Chao Phraya River. 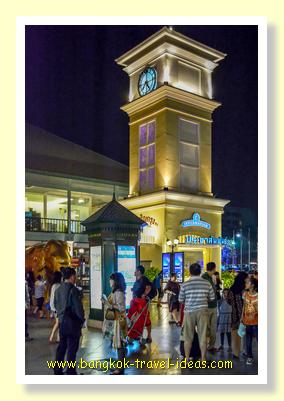 Down at the river there was quite a long queue for the free shuttle boat and we had to go to the back and wait.

I think we had to check which line to join as I don't recall any signs.

Once down on Saphan Taksin pier, we hadn't been waiting long and a ferry boat turned up.

Once all the passengers had disembarked, then the line started to move, but it was clear that we would not get on that boat.

Just at that time, another boat turned up at the pier and someone shouted out something in Thai.

The second boat was also going to Asiatique the Riverfront but it was not free.

So we had a choice to wait for the free boat to come back or pay 20 baht each and be off and running with our evening.

Well, it did not take long to decide and like most of the other people in the line we just headed for the second ferry boat.

The boat soon set off and and by now it was already dark. 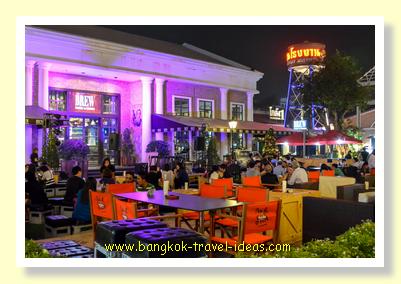 The hotels along the Bangkok riverside were all lit up and looked very inviting.

We passed Lebua Hotel, the Chatrium Hotel and the Montien Hotel on the way and in the distance we could see the large Asiatique Ferris wheel and the lights of our destination.

The trip on the Chao Phraya River only took about 10-15 minutes and before we knew it the ferry boat berthed alongside the wharf of the Asiatique.

Basically that is how to get to Asiatique the Riverfront, using the BTS and local ferry. 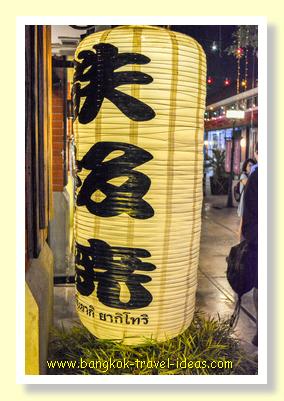 Getting off the boat, we just walked around a little to get our bearings and see where the best restaurants were located.

Most of the restaurants were pretty full, especially those located on the waterfront and some even had small queues waiting outside.

There were other restaurants inside the small streets that had plenty of room though.

We walked back around and found a seat at Happy Fish on the waterfront and had a mix of Thai food and battered fish with a couple of drinks.

This is a place you can take the whole family, the food isn’t expensive and there are restaurants that will cater for children.

It is a nice place to wander around as the whole place has been reconstructed from the old architectural style of 1907-1947; the so called Colonial Period. 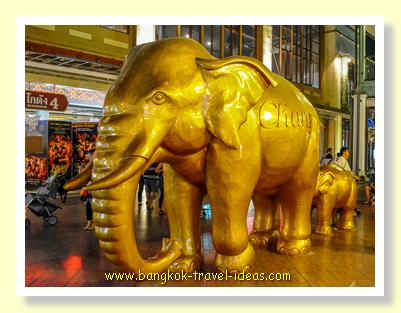 Asiatique the Riverfront is all pedestrian precincts and so there are no cars to worry about if you have small children.

The site and pier used to belong to the East Asiatic Company, who spearheaded the relationship that Thailand established with Denmark by exporting teak to Europe.

It is these international trade ties that are credited with maintaining Thailand’s independence through a period of European geographical expansion. 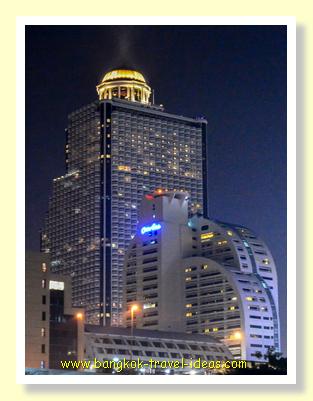 Over on the far side of Asiatique the Riverfront is the large Ferris wheel that we saw from the boat.

Maybe an attraction for some, but not for me. I am not the best with heights, so we gave it a miss.

If you dare to go on this ride you will be rewarded with some fabulous night time views over the Bangkok skyline.

At the end of the evening we waited for the ferry to come back and this time we were lucky enough to get the free one, so that was a bonus.

The return journey was just the same, only in reverse.

Total cost for two people for the evening was:

Asiatique the Riverfront is located in Bangkok's Riverside area and if you are at all interested in photography, then arrive around 5:00 pm and scout around to get some great sunset and evening images along the waterfront.

Hotels Near Asiatique the Riverfront

If you want to stay within a short distance of the Asiatique the Riverfront then I recommend staying at the Ramada Plaza by Wyndham Menam Riverside Bangkok.

I know it is a real mouthful of a hotel description, but for a reasonably priced hotel in a great location it is a good choice.

Is there a free shuttle boat to Asiatique the Riverfront?

What to do in Asiatique?