Today was the day to check out and head on over to the National Park at Khao Yai.

With the car all packed up we set off back towards Bangkok. Travelling out of Nakhon Ratchasima on the big duel carriageway I again spotted the big white temple on the right hand side. 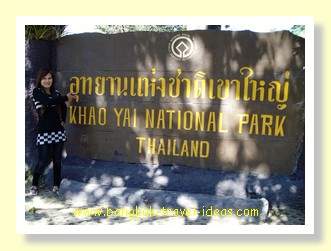 If you intend to stop off there, then do it on your way into town as otherwise you need to do a couple of U-turns on the highway and backtrack.

The turn off to Khao Yai National Park was soon upon us and it was well signposted.

Almost as soon as we turned into the road we could tell the difference in the scenery. The road also started to ascend and gradually we got higher and higher as the car went up into the mountains. 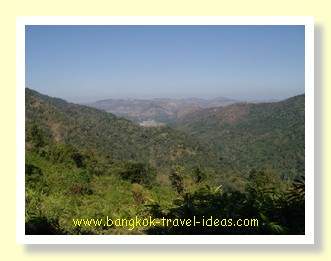 At various places along the road there were little guest houses and simple forms of accommodation.

Eventually we reached the Khao Yai National Park gate. There was a 500 Baht fee to pay to enter, which got us a ticket and brochure.

After following the road some more we reached one of the lookouts and stopped the car to see the view and what all the people were looking at.

There were heaps of monkeys around the place and when driving you need to give them time to get out of the way.

At the lookout we could see over the valley in to the distance. 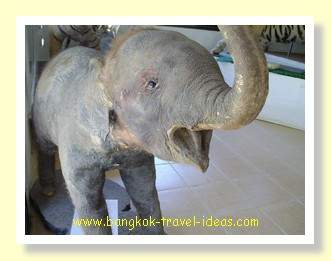 The air was a little cooler at this altitude but the climate was very pleasant.

After a brief photo shoot we continued on up to the main parking area where they had some facilities and the Khao Yai National Park information office. There was also a place to book cabins as well as a place that had a stuffed baby elephant and a large lizard and some information about the flora and fauna of the park.

On the other side of the road they were serving food from a little stall and had a large undercover hall.

I had seen halls like this before on the nightly news. It is where all the campers go to when they get flooded out of their tents in torrential rain. 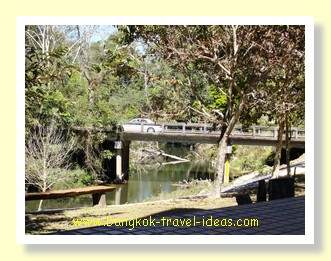 We stopped for a while to get something to eat and relaxed alongside the mountain stream that passed by the outdoor seating.

It was very pleasant sitting in the shade listening to the sound of the stream and eating lunch.

Afterwards we found there was a path at the back of the National Park offices that led to a local waterfall.

With a bit of scrambling we managed to make it down to the river bed.

We had been on the lookout for any wild animals, but nothing really appeared or else we scared them away with all the noise we made.

On the way back we took a bit of a detour to have a look at the cabins that were available for rent before setting off in the car again.

The cabins that we looked at were really quite large.

Once in the car we drove slowly along to see if we could see any elephants hanging around in the scrub. 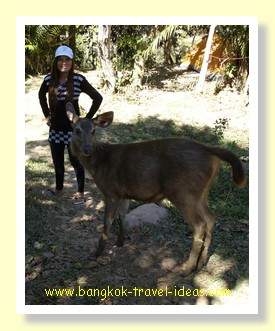 At one point we could see grasslands to the left and a herd of Asian elephants in the distance. There was a group of people with cameras with telephoto lenses around the viewing spot.

We continued driving slowly and a little further on we drove into a campsite to check out what was on offer.

If you have your own tent you can come and pitch it here or you can rent a tent and bedding from the office.

The rentable tents are already erected. The campsite was quite large a small river ran down one side.

Young children were busy splashing about in the river and there were some wild deer as well as monkeys all over the site.

You would need to keep any food out of the reach of the monkeys and keep your tent zipped up. At night the gates to the campsite are locked and you cannot leave after sun down.

The roads of the Khao Yai National Park become the playground of the elephants and other nocturnal creatures and for safety reasons it is best to stay on the campsite at night. 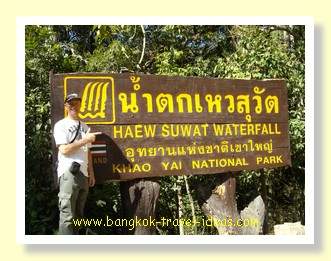 We wandered around the campsite some more before travelling on to another viewing spot that had a lot of coach parties and a very large waterfall. We had already decided not to stay the night.

The path down to the waterfall was very busy and we had to negotiate some very steep steps down to the bottom. Going down was going to be lot easier than going back up, I thought. 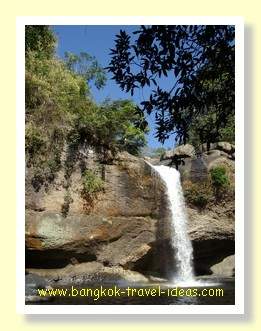 There were quite a lot of school parties down at the bottom and lots of local tourists and a few people swimming and paddling in the water.

With all these people and the noise they were making, it was unlikely that we would see any native animals.

The waterfall looked great against the blue sky and I took some more photos around the place, before tackling the stairs back up to the top. 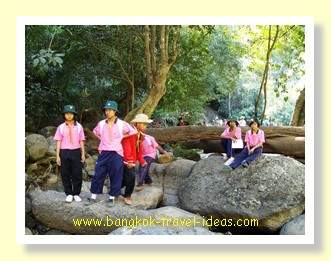 Following the road back it was decided not to camp out and just return to Bangkok. There were two ways to go.

One way was to go back to the entrance and the other meant exiting the park on the southern side.

The exit on the southern side seemed much closer so we took the signed exit and followed the road to leave the park.

But you know there is always time to visit another waterfall only this time when we pulled off the road we didn’t fancy the long walk down and so just took a photo in front of the sign, in my book that counts. 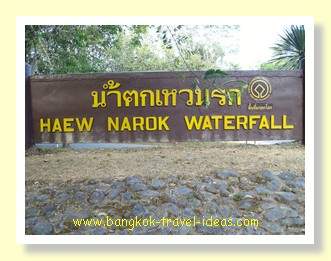 Leaving Khao Yai National Park by the different exit meant that we had to navigate our way home using the street signs, which wasn’t as easy as it seemed.

To cut a long story short we ended up taking the wrong turn at some point and having a scenic drive via Chachoengsao.

It wasn’t all that far out of our way but it just seemed so at the time.

So what did it cost to visit Korat and Khao Yai National Park for four days and three nights, excluding accommodation?

Depending upon the exchange rate this will work out to be about AUD$43 per day.

Leave Bangkok in the early morning and set off by car to go to Nakhon Ratchasima, the largest city in the Northeast of Thailand. The town located about 4 hours from Bangkok and is the gateway to the Isaan province.

Explore the town of Nakhon Ratchasima on foot and visit the famous shrine to Ya Mo, who is credited with saving the township from the marauding Khmer troops.

Walk around and visit the market and various Korat Buddhist temples at the entrance to the old town.