Prachuap Khiri Khan Things to Do

For the adventurous traveller just about one hour further than Hua Hin is a sleepy beachside place called Sam Roi Yod beach just next to Sam Roi Yod National Park.

To get to Prachuap Khiri Khan province, just take the Route 4 Highway out of Bangkok and turn off at Route 1020 and follow your Google map to Namaste Resort.

After researching Thailand beach resorts along the coast and talking with friends I narrowed my selection down to just two places on Sam Roi Yod Beach. 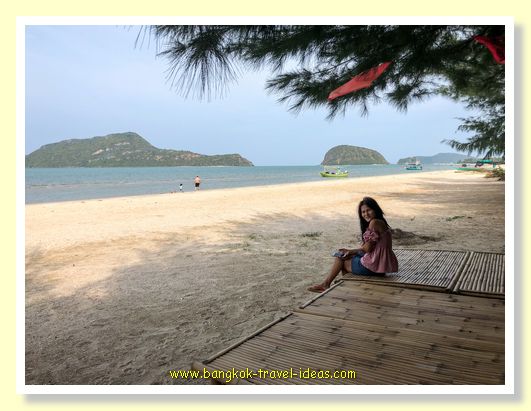 The first place in Prachuap Khiri Khan province is the ever popular Dolphin Bay Resort, it is ideal for families with young children where parents need a bit of a break.

There are a range of rooms and facilities such as swimming pools and children's club.

The second place in Prachuap Khiri Khan province was a recommendation from the Agoda website and traveller reviews and was called the Namaste Resort.

Namaste Resort is basically a block of four rooms set behind the B2B Crazy Bar.

Each room of the Namaste Resort has Air-conditioning and a small outside terrace along with its own parking area. 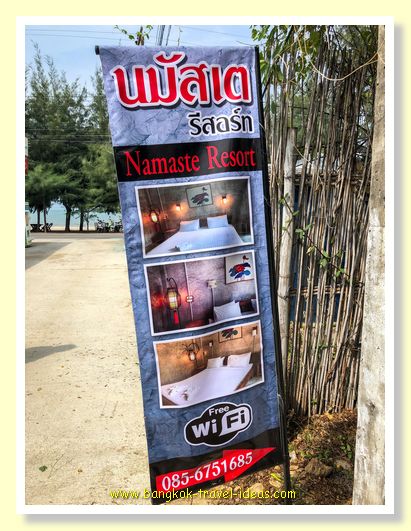 The four units are down the small soi behind the B2B Crazy Bar and this puts you only about 50 metres from the main beach, which is really convenient. 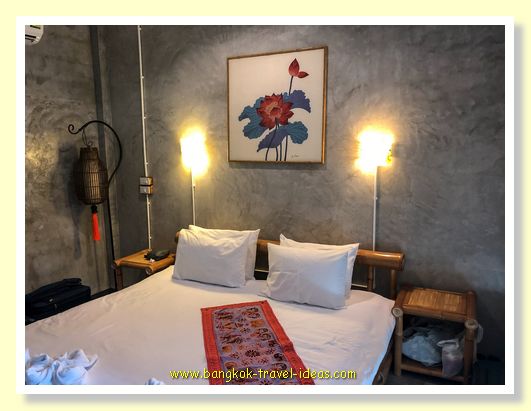 Once you walk out from the soi and cross the road, the beach area opposite the B2B Crazy Bar has a number of deckchairs and Thai style bamboo beds that you can relax on under the shade of the trees.

For most of our stay we just relaxed on the Bamboo beds and looked out at the scenery. 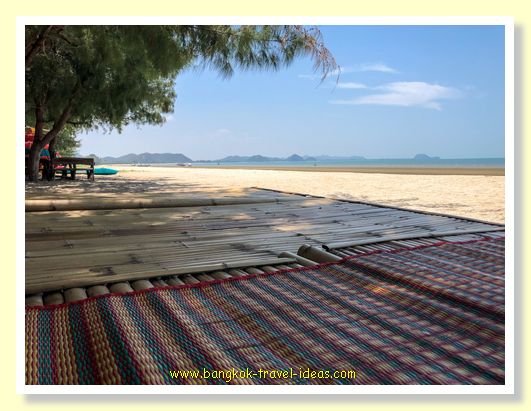 I presume you need to be a customer of the B2B Crazy Bar to be able to use the chairs, but as we were the only people in the area nothing was said about the use.

I suspect during busy periods the use may be more regulated, with perhaps a charge for non-patrons. 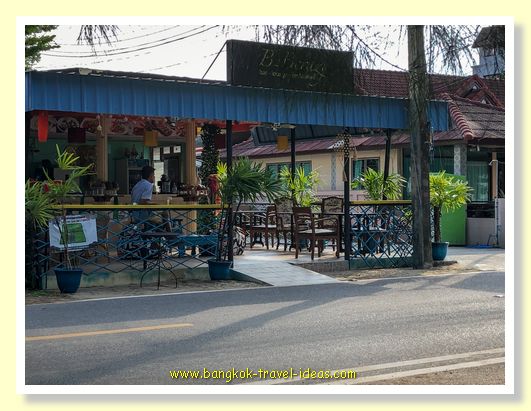 The B2B Crazy Bar seemed to open around 11:00 am and then we grabbed some lunch from the bar to eat over at the beach.

In the afternoons it was almost an afternoon ritual to grab a couple of beers and just chill as the sun went down behind us.

Often fruit from the market was bought for an afternoon snack, usually with some beer from the bar. 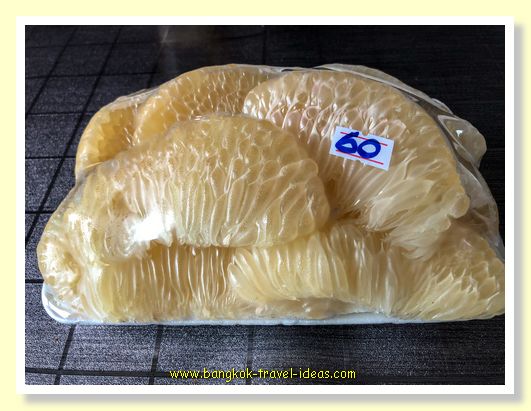 Some days we would also eat at the B2B Crazy Bar in the evening as they had a good choice of Thai foods on offer and there was no need to go anywhere else. 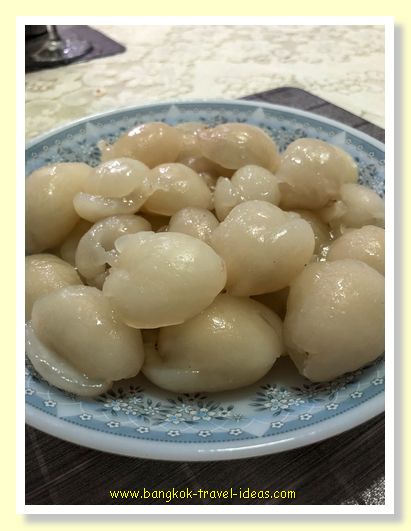 For the first two days the shade under the tree was enough to not require sunscreen.

However on the third day something happened, as even though I was sat in the exact same place, I got a bad sunburn down one side of my body only. 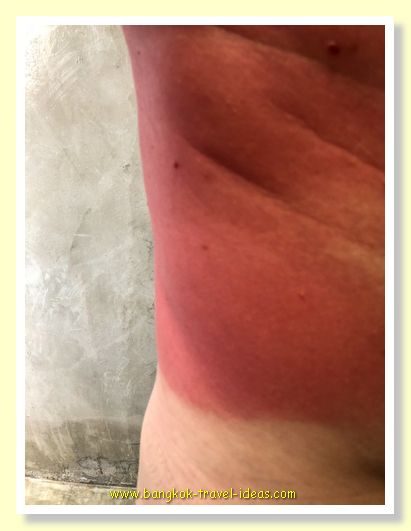 As it was the side of my body that faced the sand, I can only surmise it was caused by sun reflecting off the sand and under the tree.

Review of the Namaste Resort

We stayed at the Namaste Resort for four nights in May, which is at the end of the tourist season, just prior to the rainy season starting. 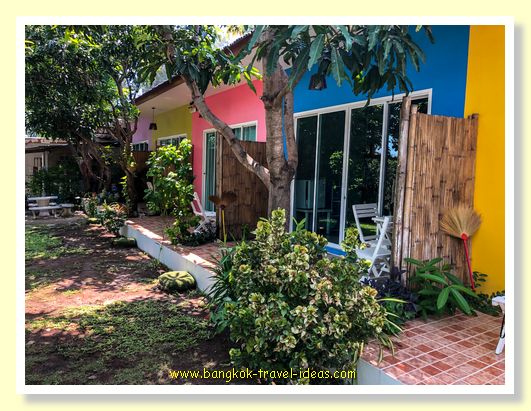 So what did I like about the Namaste Resort?

Further information on price and availability in Prachuap Khiri Khan at the Namaste Resort can be found at this Agoda link.

If you ever come to Prachuap Khiri Khan province then you are surely going to visit Phraya Nakhon Cave.

To do something different one day, we headed off to see one of the local attractions in the car.

The Phraya Nakhon Cave was only a few kilometres from the Namaste Resort. 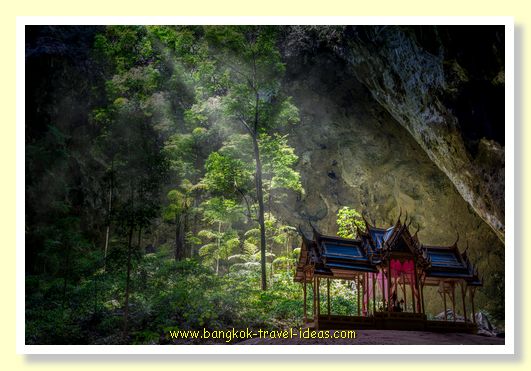 I have seen many of these photos and also read articles about other people's visits, but there are two important points that I missed when they recounted their visits and I will come to these surprises shortly. 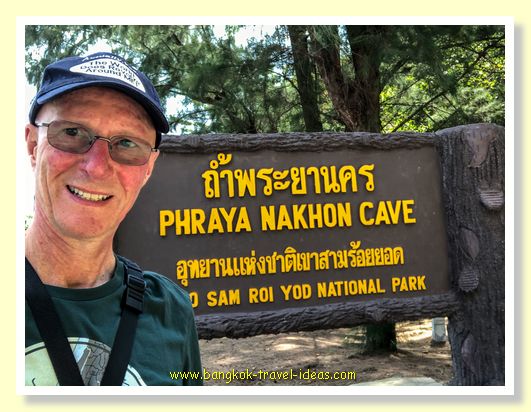 The car park was located quite easily at Bang Pu beach and the place is actually geared literally for hundreds of tourists, as there are multiple salas set up where food can be served.

However on the day we went, there was us and another couple and that was it. 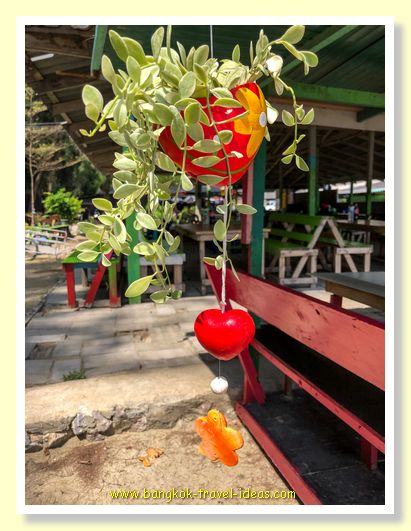 Just be aware though that the place must get really busy at certain times of the year, when the coaches of tourists arrive.

If you decide to come to Phraya Nakhon Cave then weekdays are also likely to be quieter than weekends. 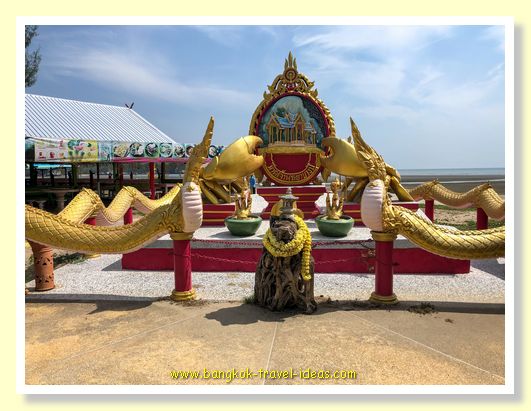 The first surprise for us was when we asked a ticket seller, "where is the cave"?

She indicated that we needed to purchase a boat ticket for four hundred baht and as the cave is within the National Park this included this entrance fee also.

As I recall the total cost of the boat and entrance to the National Park was 400 baht. 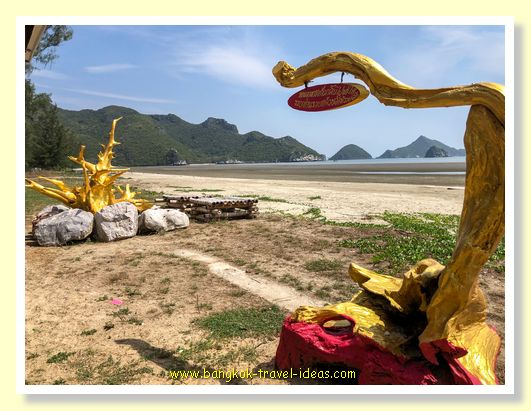 As far as I know, I had never read that it was necessary to take a boat to the cave and given the cost, the alternative route that the lady told us of was considered.

Instead of taking the boat there is an alternative cliff walk, so we considered saving the four hundred baht and taking the cliff walk.

However, when walking to use the toilet, I looked back across the car park and could see how high the cliff was.

As we did not have good walking shoes and the sun was quite strong we opted to pay for the boat.

I must say that I would realise what a good decision this was later in the day.

In fact others have described the walk up to the cave as a "challenging hike", so be warned.

And so it was that we purchased the boat ticket. 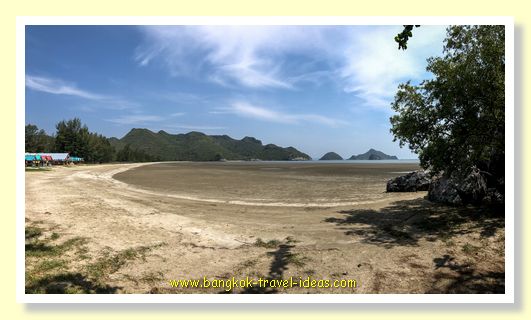 To get to the boat you have to walk down across the beach and then have to wade out into the water.

Now be aware that if you get a boat with a shallow draft, you will only get wet up to your knees.

But, if you are like the Western couple ahead of us who got a boat with a deep draft, then she was in the water up to her waist before managing to clamber up onto the boat.

Even though the weather was warm, it is not ideal to be walking in totally wet clothes, just due to the chafing factor.

Just a word to the wise that you that you should wear appropriate clothing for this trip and take some water with you.

Anyhow our boat set off around the headland and headed for the next bay.

The trip probably took less than 10 minutes and we were being dropped off in knee deep water on Laem Sala Beach. 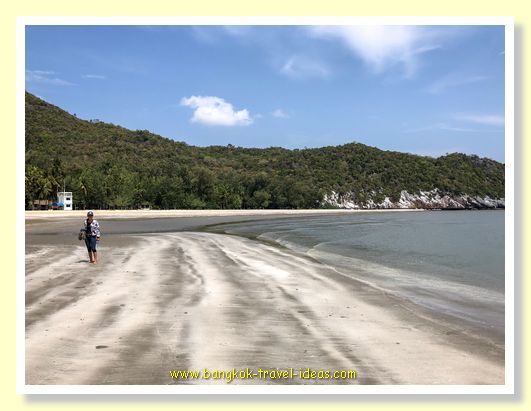 Remember to keep your boat ticket as the same boat will pick you up when you are ready for the return journey.

Once on the beach, there are signposts to the cave as you walk away from the sea. 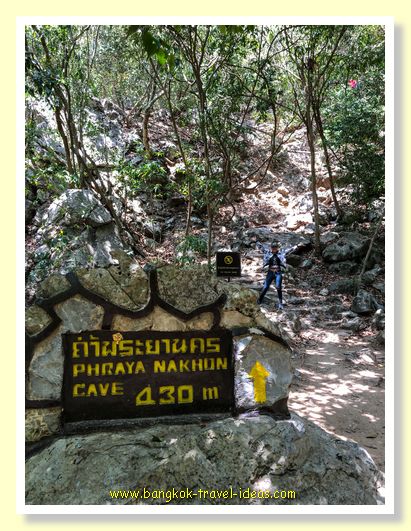 Now I don't know why but I expected the Phraya Nakhon cave to be just there at the back of the beach and so it was a bit of a surprise when we got to the steps leading up the cliff.

The walk up to the cave is fairly safe if you just go step after step, but you should be fairly fit to attempt the journey as it is a strenuous ascent of around 430 metres.

I kid you not, we passed two older people who were literally struggling with the climb and the heat; one of them decided it was too much and went back down, the other continued on to the cave.

Half way up there is a resting spot with a good view of the surrounding bay, take a break and recover your spirit.

If you persist and just go at your own pace you will eventually reach the entrance to the Phraya Nakhon Cave. 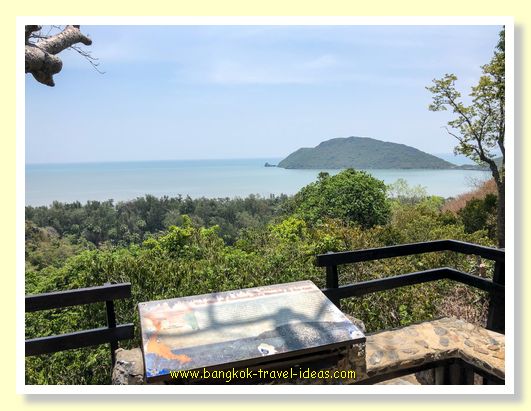 There is a small descent into the first of the two caves and once there you can wander and look around.

There is a small wooden bridge connecting both caves.

Because of the relatively low light level, a small tripod is worth bringing for the ardent photographer or you can rest your camera on some of the many rock formations to gain some extra stability.

The best time to visit the caves is early morning when the sunlight will strike the temple from above, illuminating it in the near darkness of the cave. 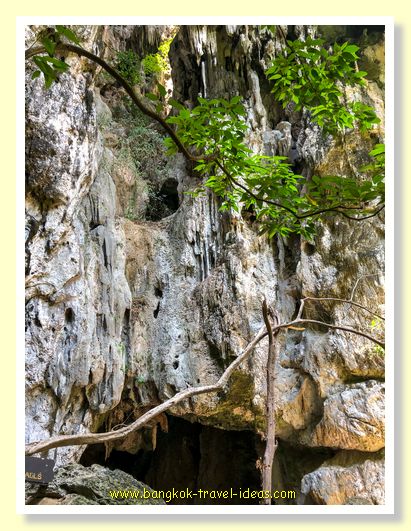 If you look around you can see the stalactites and stalagmites and some have even joined the ceiling to the floor.

Like many areas of limestone, the caves are created when rainwater dissolves the limestone to create massive caverns like these.

The cave was discovered 200 years ago when Chao Phraya Nakhon Si Thammarat took shelter from a rainstorm.

The cave was named after him and has since been visited by the Thai Monarchy on numerous occasions and the cave is home to Thailand's smallest temple; the Kuha Kharuhas royal pavilion, which was built in 1890 by instruction of King Chulalongkorn the Great (Rama V). 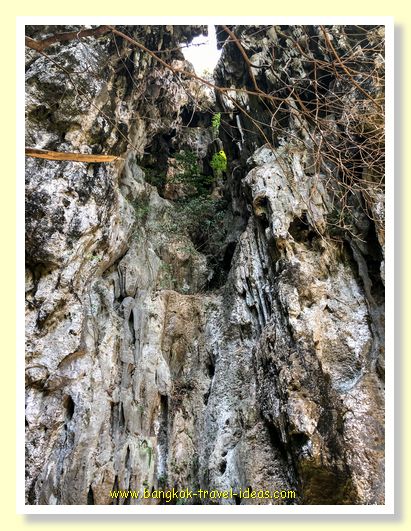 No matter how long you spend in the cave, the time of reckoning will come when you need to start the descent.

Take your time and descend slowly.

I managed to slip once but with no real damage to my camera as it crashed into the rocks.

Although the ascent to the Phraya Nakhon Cave is difficult, we managed to do it in shorts and thongs and whilst not ideal footwear, it was certainly doable. 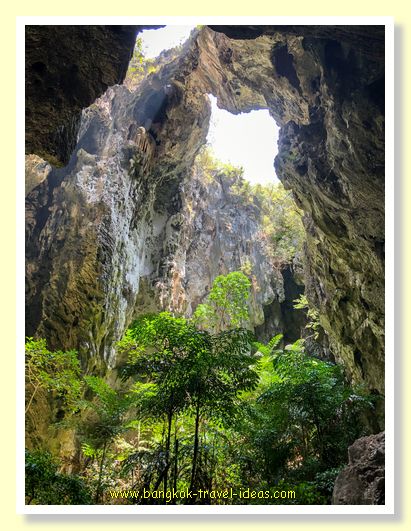 After descending the mountain there is a food hall on the left side.

We ordered from the menu and grabbed plenty of drinks as we were so thirsty after the walk.

On the beach there are deckchairs to rent and because this is inside the Sam Roi Yod National Park, you can even stay on the beach in a tent or rent a family bungalow.

I can't think of a better view to wake up to of a morning. 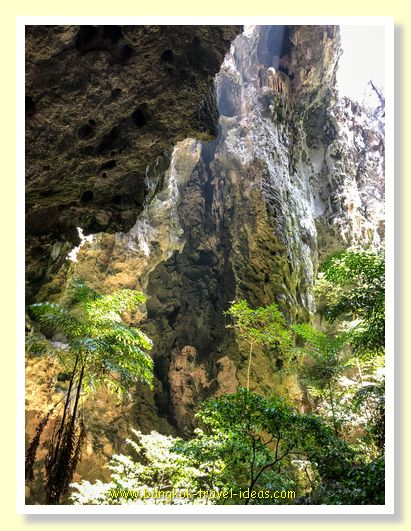 The rest of the afternoon was spent just lazing on the beach looking out to the island and watching the waves lap the shore. 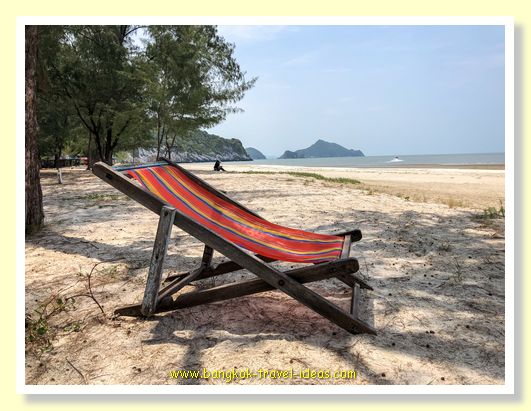 If you take an organised tour then you can include a visit to the island along with your boat trip.

To get your return boat from Laem Sala Beach back to Bang Pu Beach, go to the hut on the left side of the beach as you face the water and the attendant will call it to come.

Prachuap Khiri Khan has many interesting tourist attractions for those with a spirit of adventure and willing to go a little off the beaten tourist track.

If you visit Prachuap Khiri Khan province then it is worth the side trip to go and visit the Phraya Nakhon Cave, but go prepared with a hat, some water and possibly prepared to get wet. 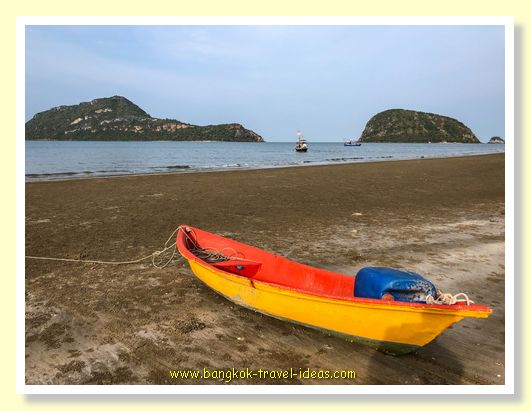 Enclosed shoes are advisable, but I did the trek in thongs and apart from one tumble on the way down, I think my footwear was not the best, but it was okay.