Wat Phra Phutthabat, Saraburi is recognised as one of the top six Thailand Buddhist Temples and is well worth a visit on your next trip to Thailand.

It is located 190 Km to the north of Bangkok in Saraburi Province and about 20 Km outside of Lopburi.

Most of the drive is on the expressway or local roads so traffic should not be a problem, but if you don't have your own transport then

It is very easy to take a day trip over to Wat Phra Phutthabat as the drive is a leisurely 2.75 hours from Bangkok and it can easily be visited in a day.

There will even be time to take a side trip to Lopburi to see the Lopburi monkeys. 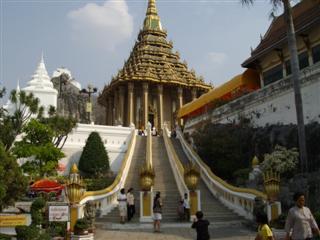 This large Buddhist temple was built in the 17th century after a representation of the Buddhas footprint was found in the limestone rock and it is considered one of Thai Buddhism's holiest of sites.

The 2 metre footprint was declared a footprint of Buddha and the temple was built around it.

The local district was given the name Phra Phutthabat. 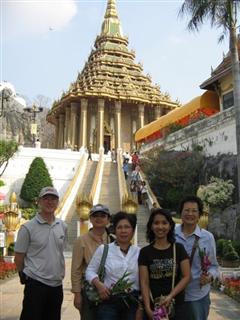 At the entrance to the temple you are greeted with huge stone steps in three separate staircases rising up the hill.

The sides of the staircases are flanked by Naga balustrades and at the base are bronze five headed Naga snakes, which you can just see directly behind the people's heads in the photograph above.

This three part stair case represents the three ladders used to descend from the Trayastrimsa Heaven.

At the top of the stairs the two metre footprint is housed in a monodop, which is an ornately finished small building built to protect the holy object.

Visitors to Wat Phra Phutthabat come to the monodop to make merit and place gold leaf onto the foot print.

Unfortunately I don't have a picture of the monodop and footprint as I got separated from my group and was looking at the view and busy taking pictures of myself. 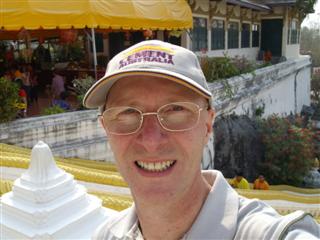 Wat Phra Phutthabat is located on the side of a hill and if you continue up the steps there are some other things worth seeing.

Although I didn't count the steps, I was told that there are about 225 that take you up to the rock face at the top.

In places the steps are fairly steep as you can see from the picture below, but the view from the top is worth the climb. 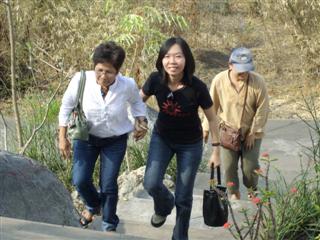 If the weather is hot you may need to take a rest on the way up. 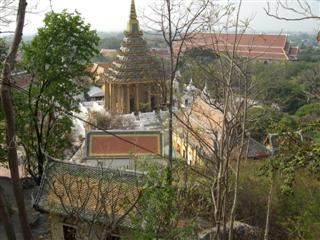 After you have climbed the 225 steps you will reach a small flat area that houses a Buddha image up against the cliff face. 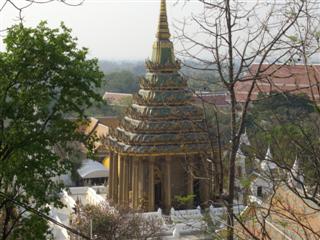 It is said that if you look long and hard at the rock face you can see the face of the Buddha.

You can buy gold leaf here to stick to the cliff face or to the Buddha image. 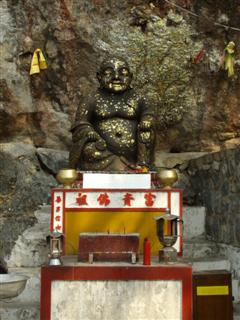 The walk down the steps is much easier than going up and on the way down you can see the Temple Bells.

Visitors to Wat Phra Phutthabat come and hit the bells one by one saying a prayer as they do so. It is supposed to bring them good luck.

From my photographs Wat Phra Phutthabat looks very quiet, but in fact there were many hundreds of people there that Saturday. 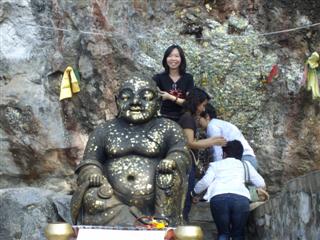 As you leave the temple grounds and return to your vehicle, you walk through a small market area that has food and fruits that I didn't even recognise.

Interestingly I also spotted some hand carved walking sticks for about 100 baht each, extremely ornate and a bargain at that price.

I really could have done with seeing the walking sticks for sale before I climbed the steps. 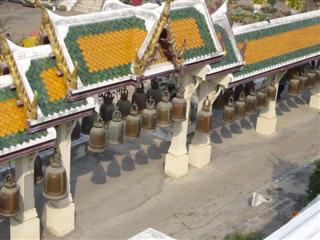 I enjoyed visiting this temple and am only sorry I missed the Buddha's footprint and I have added this Buddhist temple to my list of places to revisit in the future.

I don't recall paying any entrance fee to the temple, although some websites suggest that there is a small fee for entry.

After we left Wat Phra Phutthabat, we went on to visit the town of Lopburi, which has a different type of interest.

Lopburi is a small town with a population of approximately 27000 and is located just 17 km North West of Wat Phra Phutthabat.

Lopburi is the provincial capital of Lopburi Province and was previously the second capital, after Ayutthaya was established in 1350 AD. 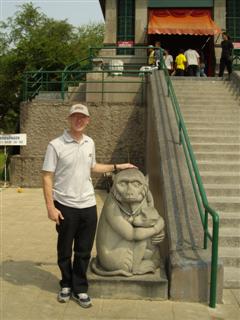 Previously it was an important centre of the Khmer empire.

Now its main tourist attraction is the presence of crab-eating macaque monkeys that inhabit the old town, but especially around the ruins of the Khmer temple Phra Phrang Sam Yot and Khmer shrine Phra Karn Shrine. 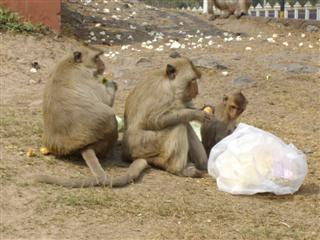 The Phra Karn Shrine is located in the middle of a roundabout and you have to negotiate the traffic to get to it.

Outside the entrance steps are a pair of stone carved macaque monkeys.

If you cross the road and the railway line you can visit the historic Phra Prang Sam Yot which has three prangs that represent Brahma, Vishnu, and Shiva (the Hindu trinity). 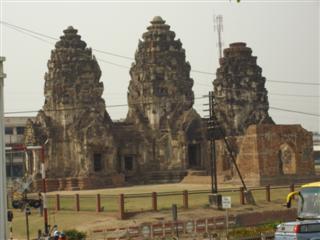 The monkeys stop frequently at the water trough located next to the railway line as they travel between the shrine and the temple whilst cleverly avoiding the road traffic.

Be careful of your possessions when the monkeys are around as they are not afraid of humans and they can quickly steal your handbag or purse.

In the month of November there is a monkey festival, where the townsfolk put on a lavish buffet for the benefit of the monkeys.

In some way this is to thank the monkeys for the tourists that they bring to the town.

The idea to have a monkey festival started from a local businessman in the the 1980's and has continued ever since.

It sounds a bit like feeding time at the zoo, doesn't it.

If you are thinking of coming to visit the Lopburi Monkey festival and wanting to stay overnight in the town, then it is advisable to book your accommodation ahead of time, to ensure you are not disappointed. 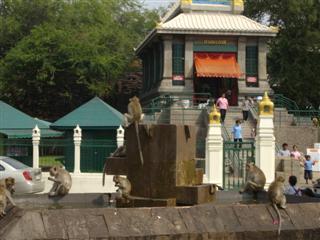 If you follow the railway line back across the road and walk through the car park there are ruins of another Khmer building.

Most of the walls of the ruins in Lopburi are not above head height and you can walk around the outside of them taking photographs of these amazing Buddhist temples as you go.