The weather in the region of Thailand north of Bangkok is split into three seasons;

The southern peninsular region only has two seasons; the wet season and the dry season.

The dry season is the coldest of the three seasons and is sometimes referred to as Winter by some Thais.

These three seasons are influenced by the regional monsoon rains that sweep over Asia.

It helps to have a good understanding of the weather patterns so you can determine the best place to stay in Thailand, depending upon the time of year for your planned visit.

You don't need to be a meteorologist, but if you can imagine which way the winds are blowing at which time of year, then that should be enough.

Whilst most people think that a monsoon is related to wet weather, that is in fact not the case.

The word monsoon just refers to the seasonal change in the direction of the prevailing wind.

So there can be both wet and dry monsoons across Asia.

Monsoons always blow from cold regions to warm regions and if you think back to your early school days you will remember that warm air rises and as the warm air rises, so the cool air blows in.

Thailand is subject to the Southwest monsoon that travels over India and Pakistan in the April to September period; this brings the rain.

Thailand is also subject to the Northeast monsoon that travels over the Philippines, Taiwan and Vietnam in the October to March period and this is the dry season in Thailand.

During the April to September period, the prevailing wind is from the Southwest and is coming over the Indian Ocean picking up moisture as it goes.

Once the moisture rich air reaches a landmass this moisture is precipitated as rain onto the land.

This is the wet season. 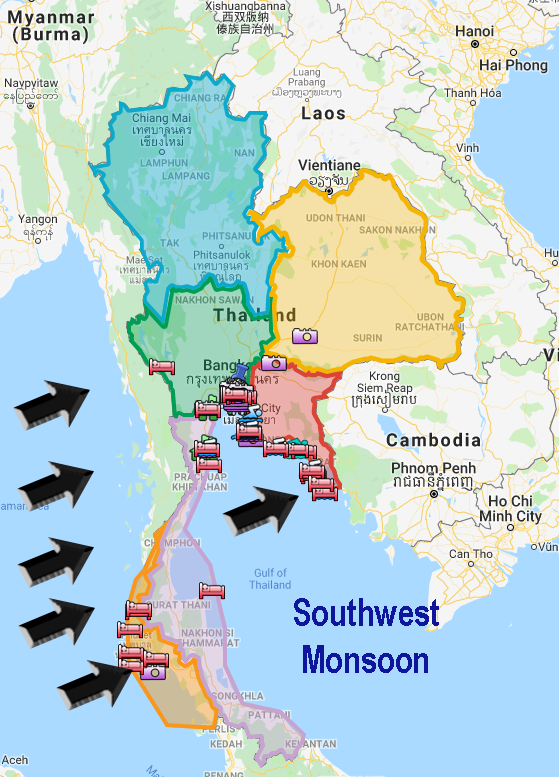 During the October to March period, the prevailing wind is from the Northeast and is coming over China, Laos and Vietnam.

Any moisture held by the air has already been dropped over these countries before the air reaches Thailand and the air is dry as it passes over Thailand. This is the dry season.

Chumphon is located under the influence of southwest and northeast winds. As a result, there are only 2 seasons in Chumphon

Generally speaking,the best time to visit Thailand is from November to February when the northeast monsoon is blowing cool, dry air that serves as a respite from the heat.

Nights can be particularly chilly and at high altitudes the temperatures can and do drop below freezing.

The summer period, or hot and dry season, is from March to June.

At this time temperatures in Bangkok average around 34 degrees, but can often reach 40 degrees with humidity levels of 75%.

Try and avoid April, unless you plan to be permanently submerged in the ocean, because this is the hottest month across the country.

From July to October is the monsoon, when most of Thailand's annual rainfall is accumulated and flooding can ravage the country.

The humidity averages just under 90%, with temperatures averaging around 29 degrees Celsius in a very wet and rainy Bangkok.

The monsoon finishes when the wind direction changes, bringing dry weather from the northeast.

At best this season can be described as unpredictable and not the constant downpour of rain like you may expect.

The middle months of this season may hold particularly heavy rains for the north of the country.