The plan was to travel from Bangkok to Koh Kood, via Koh Chang and spend a few days just relaxing on some of the nicest beaches in Thailand.

Car and Boat From Bangkok To Koh Kood

Surprisingly most people have never heard of Koh Chang and even fewer know about the secrets of Koh Kood.

To be honest, I only learned of Koh Kood earlier this year when researching for my travels and looking for the best islands in Thailand.

Like Koh Chang, Koh Kood is located to the South East of Bangkok, down near the Cambodian border.

Koh Kood is truly one of most undeveloped islands in Thailand, because for many years it has remained a disputed territory between Cambodia and Thailand.

Leaving early morning, so as to miss the worst of the Bangkok traffic we headed to Koh Chang just outside Trat.

There were already a number of vehicles ahead of us in the waiting area and the ferry had just departed, so we got out of the car and went for a stretch. 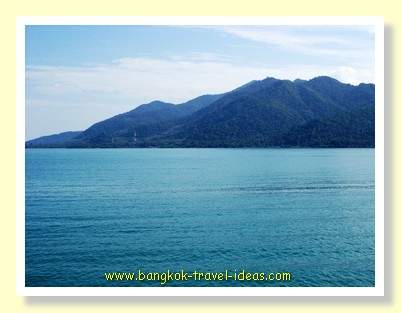 The ferry terminal is not a particularly inspiring place, but across the water I could see Koh Chang in the distance and make out the returning ferry heading back this way.

There was just sufficient time to nip off to the bathroom, visit the shop to buy a Magnum ice cream and sit down with the other island hopping tourists.

Before long the ferry docked with its cargo of returning visitors. 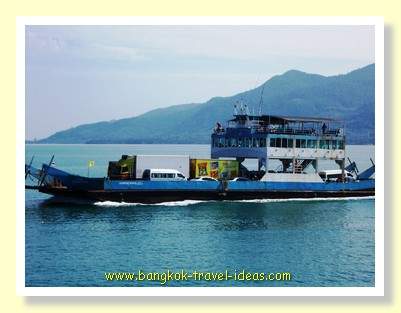 We got back in the car and were directed onto the ferry ramp.

The Koh Chang ferry ride takes about 20 minutes and you will get an opportunity to photograph the passing boats along the way and check out the other passengers.

If you are headed for Whitesand Beach, then turn right after leaving the ferry terminal.

Be prepared for some seriously steep hills and if you have taken a hire care, try not to drive too close to the car in front.

Ideally you should aim to go up the hills in a slow and steady fashion and take the sharp corners carefully.

As you pass over the brow of the last hill you get a fabulous view of one of Koh Chang’s best beaches laid out before you. Whitesand Beach can be seen on the right hand side as you go down the hill.

The road is so narrow and steep that it is impossible to stop and take a photograph, so you will just have to believe me, but it is a great view, particularly for the passengers.

At the bottom of the hill on the right is the KC Grande Resort, one of Koh Chang’s premier hotels.

The KC Grande Resort is a great choice if you want all the comforts of home, a swimming pool and the shops and restaurants close by. In the evening there are a variety of eating options right on the beach.

The roads on Koh Chang are fairly narrow and winding and even on the flat parts it makes sense to drive slowly.

Most people don’t mind driving slowly, but there is always someone who wants to overtake.

Move over to the side and let them go by.

It is not far to the Klong Prao area of Koh Chang and we were looking for a big sign on the right for KP Huts.

Not that we were staying there, as we were booked into Baan Rim Nam, located on Klong Prao estuary. 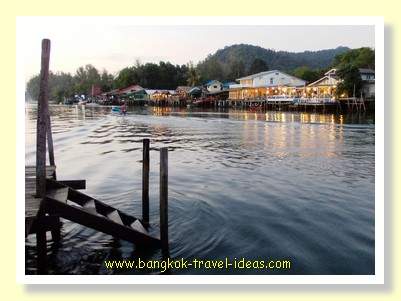 The big KP Huts sign was found without too much trouble and I turned into the small roadway.

Things have really moved on in the past couple of years, as at the last visit it was a dirt track, but now the small road was all concreted over.

If you like a quiet place to stay with a nice outlook then one of the rooms at Baan Rim Nam will probably suit you.

As we were only staying the one night I had booked the room at the rear; some of the other rooms face onto the deck and have a better aspect, but they were fully booked out as I booked really late.

There was no unpacking to do, so after dropping the bags we went back out to the 7-11 on the main road to pick up a some provisions for Koh Kood and see if we could get something to eat.

Loaded up with packets of chips, beers and bottles of Spy I saw the Roti cart parked outside the 7-11 store. Roti’s come in a variety of forms across Asia.

In Thailand they are a dough that is spun until it is very thin and then cooked on a hotplate to make a light pancake.

My favourite is made with banana and egg and then drizzled with condensed milk. The Roti is sliced into small squares and you eat it with a wooden skewer.

It is always fun to watch them cook up the Roti, especially when they spin the dough to make the flat cake. If they do it properly then there should not be any breaks or tears.

We waited a while whilst he did his magic; this guy seemed pretty good at spinning the dough.

We packed up the Roti and shopping into the car and drove back to Bahn Rim Nam to eat our lunch on the deck that juts out over the klong. 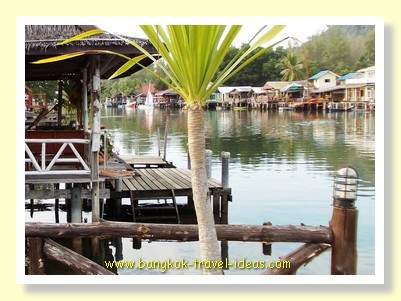 There were already a couple of people sitting on the deck; one tuned into his iPod and the other quietly reading a book, they looked up briefly and nodded.

We sat down on the little swinging seat and consumed the Roti. You really don’t need much in life to be happy and a 40 Baht Roti and a nice view seemed sufficient at that point in time. 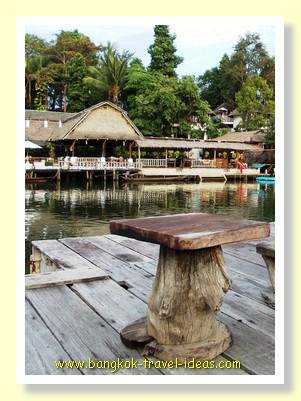 Over the other side of the klong is the AANA hotel, I could see that there were a few guest pottering about and occasionally a small row boat would ferry guests to the beach.

That is not something we had to face, as for us it was just a short walk to the main Klong Prao Beach.

So after a short rest we went back across the Baan Rim Nam boardwalk and across the empty block of land to get to the beach. 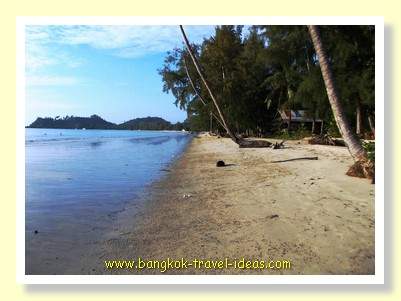 After the long drive it was good to relax and take a walk along Klong Prao beach.

Actually it wasn't such a good idea as it was mid-afternoon and the sun was still hot and there was very little breeze. So it was quick walk up past the Panviman Hotel to look around and then quickly back to Baan Rim Nam to sit on the deck in the shade.

That was where we spent the rest of the afternoon sitting on the swinging seat. 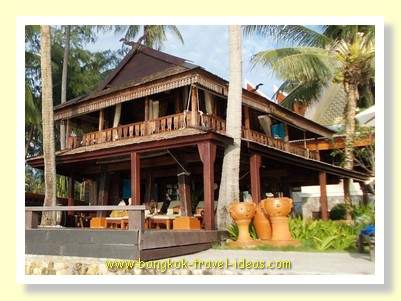 Sitting on the deck I could see the occasional boat go up and down the klong, but then suddenly one caught my eye; one I had seen before and wanted to get a photo of.

The boat is fitted with a 1 HP motor, a deckchair and a flag and the captain was piloting himself steadily back into the klong.

This guy seems to have the right idea and perhaps this is how life should be.

Later in the week I was to see him again on the ocean in front of Lonely Beach navigating his way back towards Klong Prao. 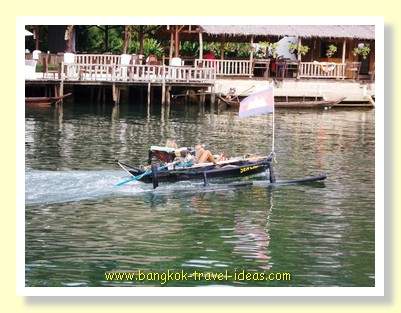 The plan for the next day was to take the Kai Bae speedboat over to Koh Kood, but so far I hadn't managed to book the tickets and I was a little worried that the boat might be full.

A couple of phone calls later and we had warned them of our intentions, so they were expecting us the following day.

On the opposite side of Klong Prao are the AANA Hotel and a couple of restaurants. 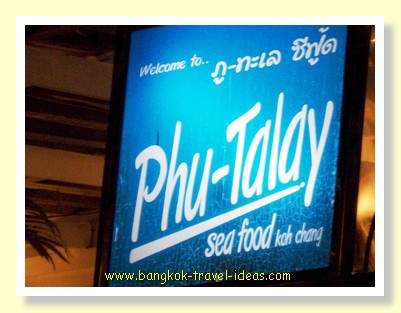 If you phone ahead they will send a little rowboat over to collect you and take you to dinner.

So that is what we did. We called Phu Talay Restaurant and let them know we wanted to come over to eat. 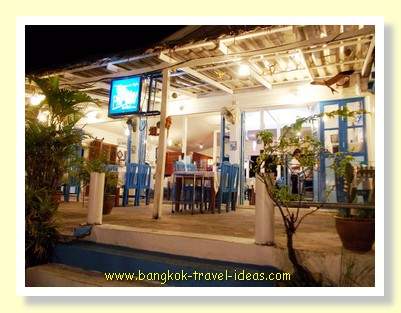 The restaurant was fairly quiet, with just a few other couples eating, but the food was good and it is a nice atmosphere sitting under the stars alongside the water. 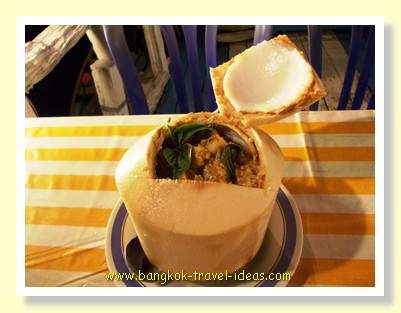 After paying the bill the oarsman took us back to the other side for the night. 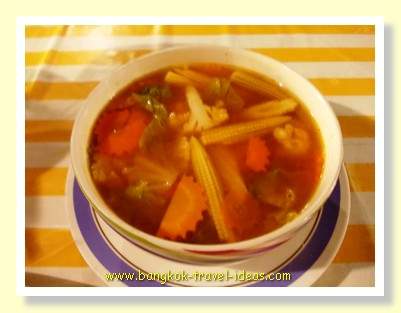 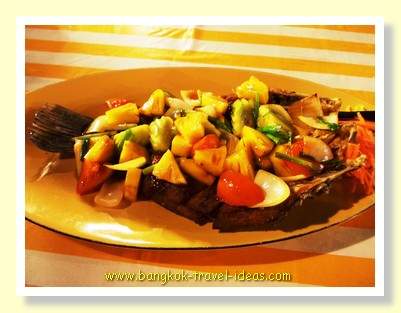 In the morning we got up early to catch the 9:00am speedboat to Koh Kood. We still weren't sure of the way or how far it was and there was still that nagging doubt over the tickets. 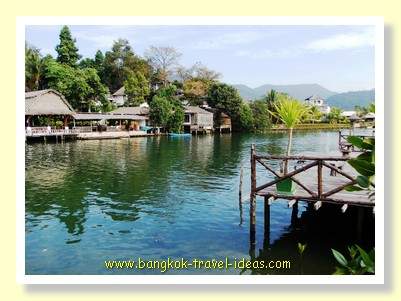 We set off to Kae Bae Huts and as it turned out it was not far at all and was well signposted and so we were there by 8:00am and went to find the ticket seller that we had spoken to the day earlier.

The ticket seller was seated just after the Kai Bai Hut restaurant area and was expecting us.

We paid for two return tickets and had to indicate our Koh Kood resort and return date.

The tickets were 800 Baht, one way, so the total cost was 3200 Baht for two return tickets. 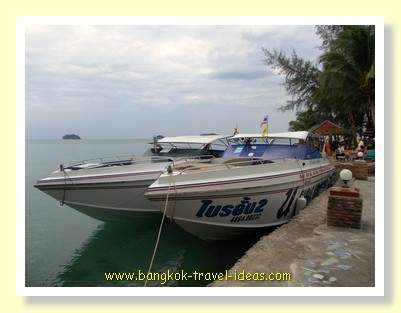 The advantage of going with Kae Bae speedboat is that the parking was free and that we would get a view of the West side of the island.

If we had gone to get the boat at Bang Bao the parking fee was unknown, plus it is a long and winding drive to get to the other end of the island. 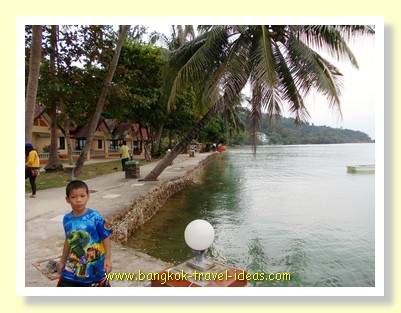 With the speedboat tickets safely in my hand I moved the car into the parking area and got the small luggage out to take, (along with the beers and chips etc).

The big suitcase was to stay in the car. 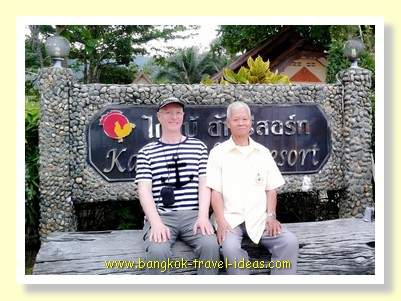 The Kae Bae speedboat was scheduled to depart at 9:00am and we passed the time taking photographs and looking around.

There was a large Thai group on tour, who wanted to have their photo taken with me.

So one by one, I had to sit and pose with them.

Here is one of me in a Traditional Thai pose, no finger pointing or two fingered salutes to be seen anywhere.

Continue reading as the speed boat left Koh Chang and set off for Koh Kood.