Outside Gu’s Bay Resort there is a little area to park your car or motorbike. We found a shady spot for the car and walked through a little trellis area into the grounds. 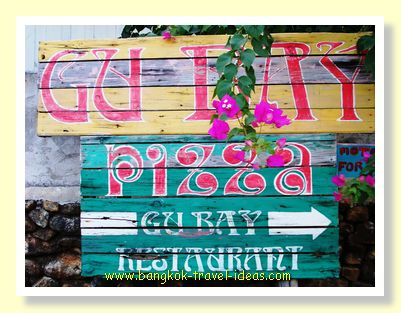 Inside there was a small lawn area with a swimming pool and a great view of the ocean and the nearby islands off Koh Chang.

Nearly all the little cottages overlooked the ocean and most seemed to have a veranda.

There is no actual check in area at Gu’s Bay Resort; you just go to the Bar to complete the formalities.

I had booked a fan room for $26 (790 Baht) and was wondering what it would be like. The Dusita Resort on Koh Kood was booked for the amazing price of $29 and it was great, but Gu’s Bay Resort was 10% cheaper.

Had I done the right thing?

It took while to complete the check-in as the man on the desk didn’t really know which room to give us.  He kept getting different keys from the board and running across the grass checking the rooms to see if they were suitable, we didn’t know what was going on.

As we waited for him to get things sorted, I looked around.

On the walls of the bar was an assortment of signage that indicated that this place was aimed at young backpackers. It was just the little things that gave it away.

Things like, “Put your shit away, so you don’t lose it“ and “there is a broom in the room make sure you use it“ and even one that said, “this is not a hotel, sheets and towels will be changed every three days. If you want more towels they cost 20 Baht”.

Anyway, the Manager came back before I had a chance to read all the signs and he quickly decided which room we were to be given and took us directly to the block nearest the bar.

We walked inside with our baggage. The room came with air-conditioning, but the manager just turned the unit off with a stick and took the remote control away with him. 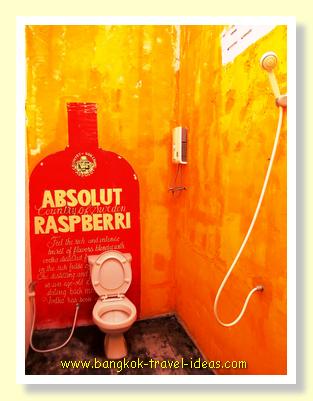 It was then we realised that the other young man had been looking for a room without an air conditioning unit and was obviously unaware of the “stick trick” to shut the unit down.

As the Manager left the room, we realised how hot it was in there and just for a moment began to regret declining the air-conditioning option. To dissipate the heat we opened the windows and turned the ceiling fan on and it soon began to cool down and after a while it didn't seem so hot.

The room had a polished concrete floor and came with a large bed, built on a solid concrete base and above the bed was a mosquito net. The room also had a TV on a table, but no other furniture.

Along one wall was a bench where you could put your clothes and there was a typical Thai ladder assembly to hang the towels on.

Just to reconfirm that this was a place used by the younger generation, the wall next to the bed had been painted in the brightest red and yellows.

But this wasn't all, the toilet and bathroom were painted in an even more outlandish manner. Not that I mind bright colours, but I did wonder if it was going to be noisy at night because of the youthfulness of the other guests.

At least there seemed one upside to the room and that was that the bathroom came fitted with a hot shower to take the chill off the water.

I suppose there should be no reason to mention that the tap was a good 6-feet away from where the shower head was placed.

I had images of running backward and forward between the tap and the shower head when trying to make minor adjustments to the water flow. 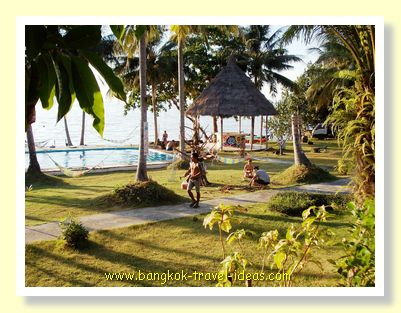 One of the reasons that I had selected Gu’s Bay Resort was because of the other guest reviews on a popular travel website, saying how friendly the place was.

The other reason was that hotels closer to Lonely Beach had a number of comments relating to loud music going into the early hours of the morning causing some sleepless nights.

I did hope that his place was not going to be noisy, but as it turned out I had no need to worry as the white noise created by the fan on high speed drowned out any possibility of hearing any outside goings on.

Unpacking didn't take long, as apart from the bench there was nowhere to put anything. I put some clothes on the bench and the remainder stayed in the bag.

There was a little sink in the bathroom and the wash bags went there. There was a cold tap only and it dripped constantly.

After a short rest we had a wander around the grounds of Gu’s Bay Resort. I still didn't know if I made the right choice, but was prepared to give it a bit longer. 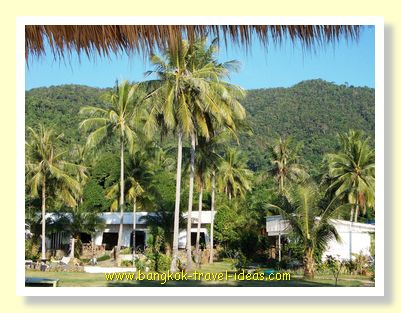 There is no sandy beach at Gu’s Bay Resort, but the place had a reasonably sized swimming pool and most of the rooms had an ocean view.

Over in the corner a young lady was helping her friend decorate one of two small cottages and was busy varnishing the floor. It looked like they were opening a tattoo parlour very soon as the sign was already up on the wall.

As we watched what they were doing, the Thai man managed to knock the pot of varnish over onto the concrete. Not fazed at all, he just used his brush and artistic skills to varnish a square onto the concrete slab.

If it were me I would have been flapping around with newspapers trying to mop it all up and would probably have made even more mess. So when you next go to Gu’s Bay Resort and see the square of varnished concrete outside the Tattoo Parlour you will know how it got like that. 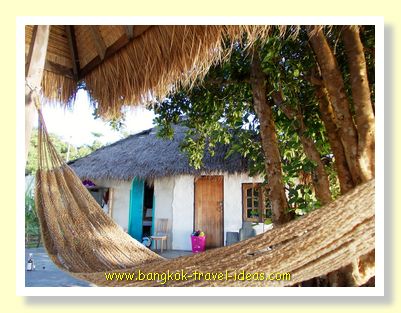 Adjacent to these two cottages was a small Sala that looked out over the water. We sat down on some of those Thai folding pillows and just relaxed for a while.

I went back to the room and got some chips and drinks so we could relax a little longer and just look out over the water and take in the view.

I have often commented that if the ocean were a field of corn blowing in the wind it, is unlikely that people would sit and just watch it. For some unknown reason, because it is a mass of water, it seems more enthralling. 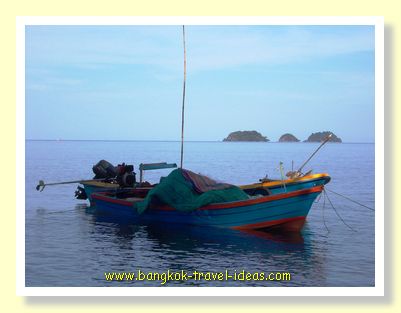 Perhaps, it is the chance of seeing a dolphin leap from the water, or a boat passing by that captures the interest. I’m not sure, but I know that there is certainly something magical about sitting and watching the ocean that nothing else can match.

We looked out, but that afternoon there were no Dolphins in the waters off Koh Chang; there were a few speedboats passing by.

Most likely they were on their way to the islands of Koh Mak and Koh Kood. We could see the Vanalee Resort next door. 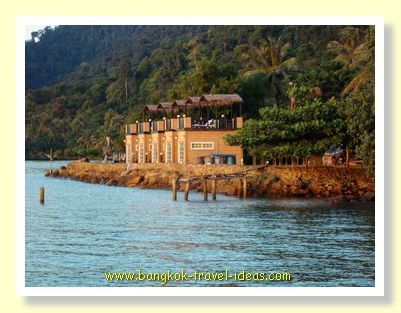 Koh Chang is an ideal destination if you just wish to chill out and have a very relaxed holiday and don’t hanker after typical tourist activities and you wish to have a quiet holiday.

Dotted along the coast of Koh Chang there are tiny villages just like Bailan where you can stop off and spend a few days relaxing at one of the many guesthouses or cabins.

Outside of the main tourist seasons you could easily not bother to book ahead. Many of these small places are just ideal to stay a few days and do a little bit of exploring and even more relaxing and then move on. 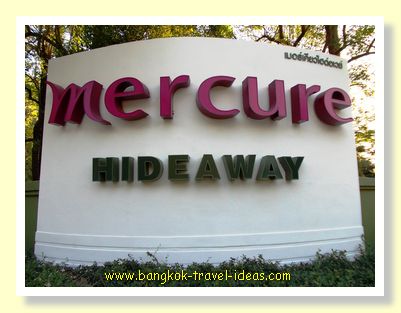 About mid-afternoon we found the energy to set off for the walk to the Bailan village, just to have a look around.

Directly opposite the Gu’s Bay main gate there was a house with a laundry sign outside it. “Great”, I thought, I can bring my washing over here when I get back. 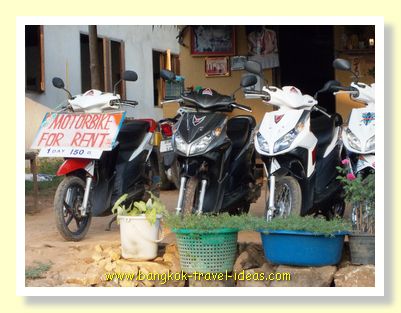 At the intersection with the main road we took a right turn and walked as far as the Grand Mecure hotel sign.

There were a few massage shops, little restaurants and places to rent a motorbike. 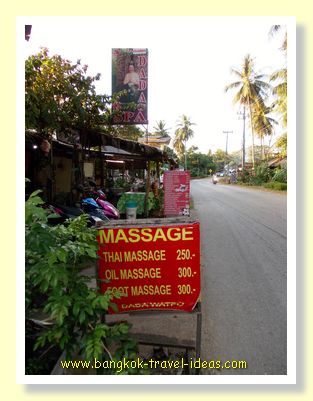 After the Grand Mercure sign there seemed to be a bar about 100 metres further on and then there was a bend in the road, but I suspected there was nothing around it. 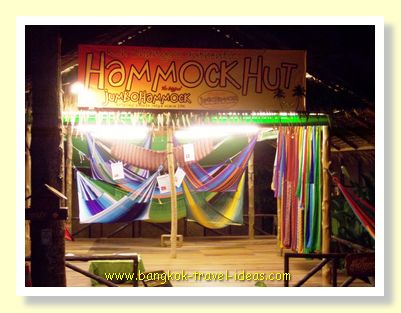 The next village along is Bangbao, so there was no need to walk any further.

Returning the way we had come, we walked all the way past the massage shops, the Hammock Hut (Koh Chang’s primary source of hammock ware) until we reached a large restaurant and resort called Tarzan Island.

We weren't hungry, but as they had live Reggae music in the evening, I made a note to come back here later. 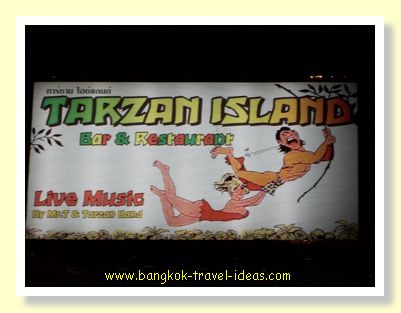 Quiet places always have to be looking out for customers and somehow we got talking to the owner of the place.

Before we knew it we were being taken out back through the restaurant, to see the various cabins and huts that were for rent.  (I think that I may have mentioned I had a website and was researching the area for an article.) 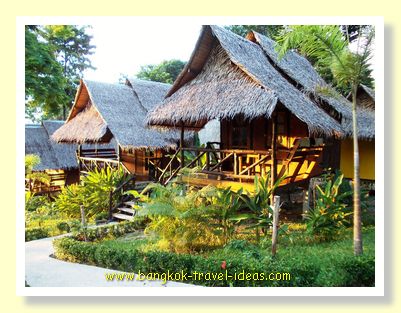 From the road you probably would not realise the size of the place, but going up the hill we could see the large number of huts available. We set off up the path and the owner showed into the first hut.

The rooms were small cabins but looked really inviting and at that time we were very tempted to move out of Gu’s Bay Resort and we said that we would think about it.

The new huts had air-conditioning and wi-fi and cost 700 Baht. 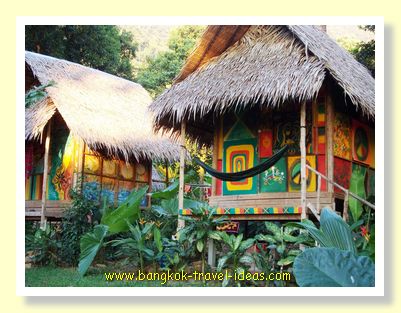 Walking further up the hill, there were some of the older original resort cabins still located on the hillside.

These, he said, ”were for rent at 250 Baht per night and if you like you can paint your own cabin in whatever design you liked”. I guess you have to supply your own paint.

Some of the cabins had already been painted by young enterprising backpackers with too much time on their hands; some looked like they could do with being painted over to cover up the artist’s unusual choice of colours.

Imagine Bob Marley colours or the colours of Jamaica and you will get the idea. 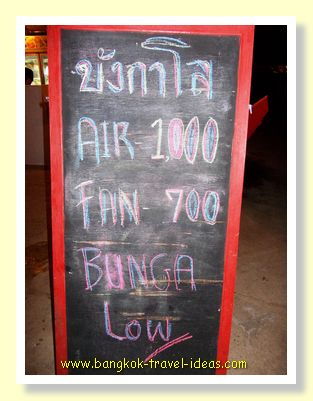 Continuing on the path, I could see how all the cabins were located around a central grassed area.

It all looked very nice, but there was no swimming pool or ocean view, like at Gu’s Bay Resort. We followed the path and were going back down the hill towards the restaurant.

On the way down the hill there was a small Sala used for massages and at the bottom of the hill we found ourselves back at the Tarzan Island restaurant and bar.

We bid farewell and made a note of what time the Reggae band started, so we could come back later that evening and sauntered back along the street to Gu’s Bay Resort.

Bailan Village is fairly small and it was clear that if any real night life was needed then Lonely Beach was the place to go.

Continue reading to see what happened when we visited Tarzan Island Restaurant that evening.