The Sanctuary of Truth is being constructed by the same man that constructed the Erawan Museum in Bangkok and it was always somewhere that I had wanted to visit. 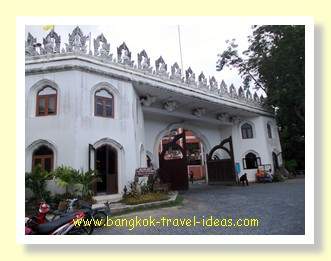 I obtained a map of Pattaya from the concierge and got him to show us where to go.

Trip to Sanctuary of Truth

In fact it wasn't far at all from our hotel. The Centara Grand Mirage Beach Resort is located on Naklua Soi 18 and we just needed to go to Naklua Soi 12.

We set off in the car and eventually found our way to the Sanctuary of Truth after a couple of missed turns. The signposting was quite good in some places and then it just petered out, or we missed the sign.

I am not sure what happened.

We pulled up in the Sanctuary of Truth car park and went to the ticket office to pay.

That is where things unravelled a bit as the entry price was 500 baht each.

The general consensus was that it was too much for Thai people to pay and even though I was willing to pay for everyone there was a basic objection to the price. 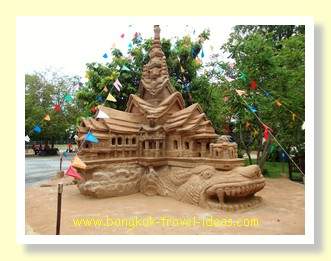 I was told I could go in on my own and the rest of the party would wait outside.

Even though I did want to go in, it would not have been any fun on my own.

So I took a couple of pictures at the entrance and we left.

Maybe we will visit another day, who knows?

Even though I did not get to visit that day, you may want to know something about the Sanctuary of Truth.

The building is carved from timber and has been under construction for more than 20 years.

Some say that it like the Gaudi stone carvings in Barcelona, it will also never be finished.

It is a building that is meant to symbolise Heaven on Earth and the very construction is keeping alive the traditional Thai wood carving techniques that have been preserved for thousands of years, but now run the risk of dying out.

The timber structure is spread over 2 Rai and has been preserved from the weather by injecting it with a copper solution.

If you do get to come to Pattaya then the Sanctuary of Truth is worth visiting by all accounts and you should allow four hours to tour it properly as it is quite large. 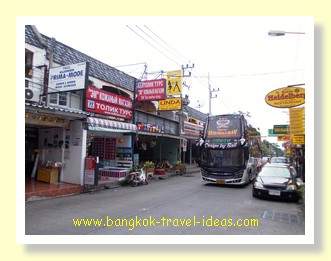 Anyway the girls wanted to go shopping, so we drove a little and then I got out of the car at Soi 12 and headed down to the beach.

After walking along the seashore for a while and taking some photographs I started to get hungry.

Lunch was had at a beach side restaurant that had a great view of the Wong Amat beach and bay.

I ordered somtam with five chillies and a beer.

The waiter did not believe me that I wanted it that hot.

Anyway when the somtam arrived I could tell it didn't have five chillies in it, but it was quite tasty so I didn't say anything.

As I ate the somtam the waiter kept looking over at me and came to check if it was too spicy, but I said, "Not too spicy".

After relaxing over lunch I headed back along the beach to where I could see the Centara Grand Mirage Beach Resort and went back to the room to drop my things and get some sunscreen. 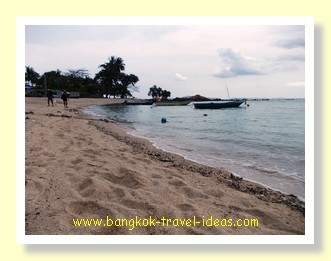 I walked directly from the beach into the hotel grounds and was stopped by the security guard who asked if I was a guest.

I showed him my room key card and he let me through.

It was good to know that at least they are keeping an eye on people entering the hotel grounds.

After the rest of the group came back from shopping we spent the remainder of the afternoon sitting under the beach umbrellas that were laid out at the front of the hotel on the beach.

I did notice that the sand was not the typical coarse Pattaya sand and had probably been imported to make the beach area look as good as possible.

The weather was warm and balmy and with the recent thunderstorm activity and level of cloud meant that it did not get too hot so as to be uncomfortable.

The rest of the afternoon was spent sitting on the beach and then later on we had a dip in the swimming pool inside the grounds.

With the recent heavy rain I didn't feel like a dip in the ocean, but many people were busy out swimming and playing around in the water.

I must admit that I was still a little disappointed about not going in the Sanctuary of Truth. 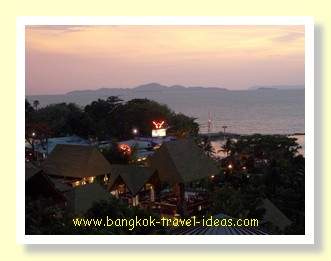 This swimming pool was quite warm and a very comfortable temperature; nothing like the Hilton Hua Hin pool that nearly froze my extremities off.

All around the swimming pool were lifeguards keeping an eye on the swimmers in case any of them got into trouble, so it seemed relatively safe.

As the sun went down we went back to the room and got ready to go out for the evening.

From the balcony I could see a "Seafood" sign flashing in the Soi that went down the side of the hotel, so the plan was to go there and relax.

This was going to be the last night in Pattaya.

Learn what to do and what not to do when you visit Pattaya.