The thought of a Koh Kood tour was enticing us and so that was the plan for the day.

The Dusita Resort had a couple of small motorbikes for rent for 350 Baht, which is really useful if you want to go and explore the island.

There is very little traffic on the roads on Koh Kood but there are some quite steep hills and some narrow bridges that you should be careful on especially if the road is wet. 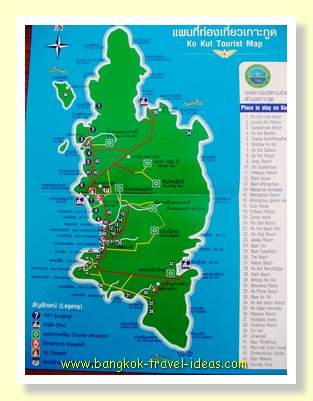 As always, you should note that if you have an accident your travel insurance will only cover you if you hold a motorcycle drivers licence.

They won’t pay out if you just have car licence.

After being shown how to start the motorbike and how to operate the brakes, we put on the helmets and set off slowly.

It has been a long time since I rode a motorbike so I took it fairly carefully. Luckily for me the roads were very quiet.

We had picked up a small map from inside the Dusita Resort, but as it turned out it was fairly inaccurate so I just drove slowly along the road and we just stopped off at places to look at the view. 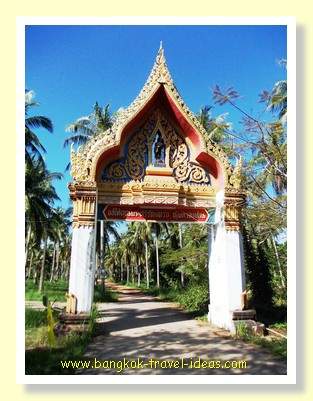 After riding for about 20 minutes we reached a T-intersection and chose to go left with no idea of where we were going.

Shortly, on the left was a Thailand Buddhist temple with a monk outside doing a spot of weeding whilst listening to some music.

We stopped briefly to look around at the buildings and have a wander around and I could see that they were building a new temple further back. 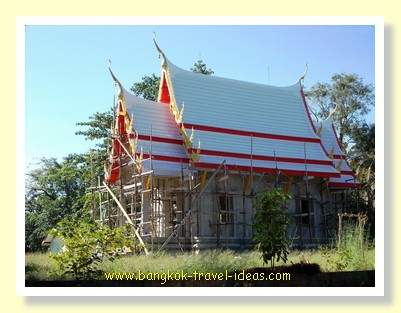 There was another building with a room full of Buddha images. We went in and lit some candles.

Over on the other side of the compound was a large bell tower, I had seen this sort of tower also in the temple at the Wat Kwan Riam Temple next to the floating market in Bangkok.

The place was very quiet and there did not seem to be anyone around and no one seemed to mind us having a look around.

As we left the monk was still picking at the weeds and the temple dogs were resting in the shade. 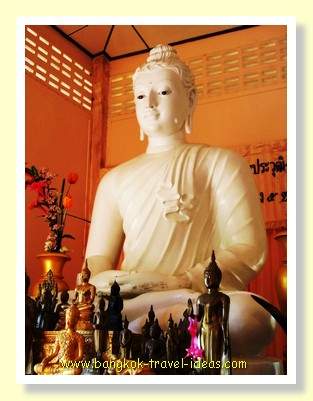 Leaving the temple grounds to continue on our Koh Kood tour, we followed the road until it reached the ocean again to find we had arrived at the Koh Kood pier. 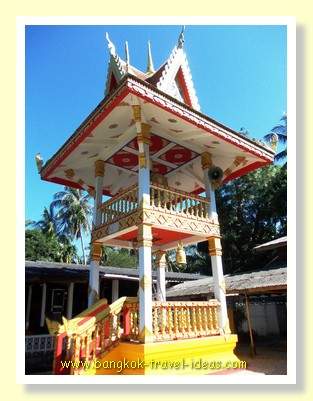 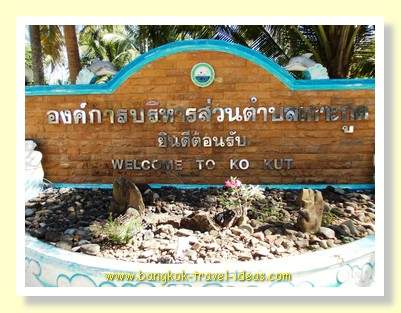 We arrived at the Koh Kood pier and could see the ferry moored at the end of the jetty. There were a couple of guards on the pier gate, but we were allowed to walk the length of the pier to have a look at the view from the other end. 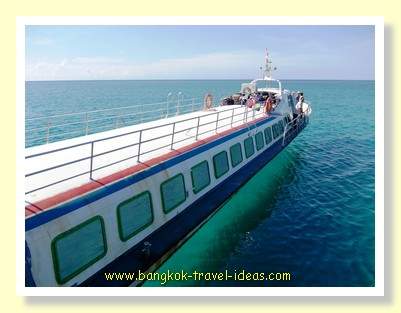 I am not really sure what they were guarding.

The Koh Kood Express goes directly to Laem Sok in Trat and as you can see it is totally enclosed and air-conditioned.

The cost is around 350 Baht for adults and children 6-9 years old are half fare. The trip takes around 1.25 hours and is faster than many of the speedboats.

The ticket price includes a transfer to your resort or nearest drop off point or to Trat town.

Because of the all-weather design of the boat, the service continues throughout the low season when speedboats can’t operate because of the high waves and rough conditions. 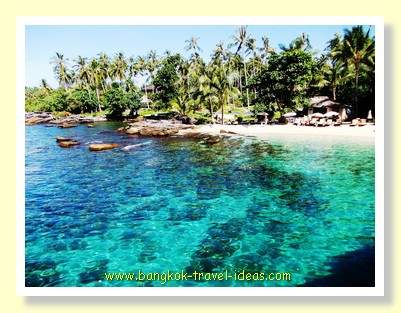 As we got to the end of the pier the Koh Kood Express was just departing and before long it was way over the horizon.

Looking back along the length of the pier I could see that on one side of the pier is a deserted beach and on the other side is the beach belonging to the Shantaa Resort.

The water was crystal clear and I could see plenty of small fish darting around.

We spent some time walking along the deserted side of the beach, which was fringed with coconut plantations.

Most of the island seems to be planted in a similar manner and there is very little in terms of any development.

There were a couple of signs on the beach warning swimmers against Rip Tides, although the conditions looked very calm on the day we were there. 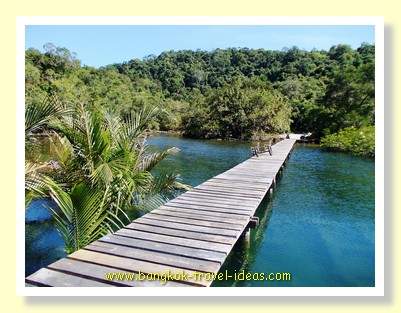 Getting back on the motorbike to resume our Koh Kood tour, we set off back the way we came.

Once we got to the T-intersection we continued straight ahead instead of turning right, which would have taken us back to the Dusita Resort.

The map we had was pretty hopeless but showed a waterfall that might be worth looking at so I attempted to find it.

Anyway after riding for a while we ended up at a boardwalk reaching out into the mangroves. 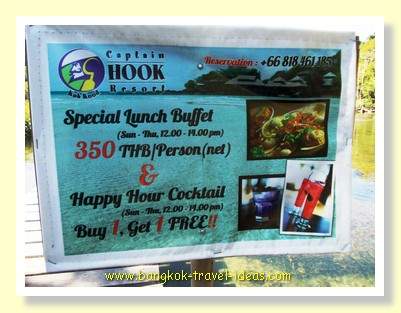 There was a sign for the Captain Hook Resort special lunch buffet and a lovely little restaurant jutting out over the water. Like all the places we had visited so far, the place was deserted.

The Happy Hour "buy one get one free" special looked very tempting, but it was still too early in the day.

The place was very peaceful and quiet and I am sure there would have been fish about.

Returning along the road I did see the sign for the waterfall and rode down the road to have a look.

At the end of the road there was a track into the jungle, but we decided that it was time to go and find something to eat and so gave it a miss. 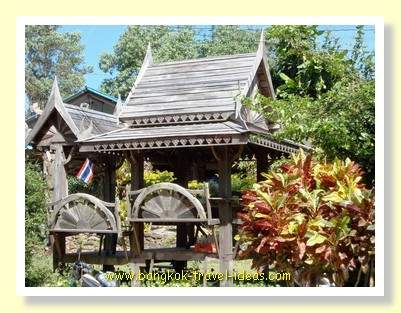 The waterfall could have been 50m or 500m into the scrub and so hunger won out and couldn't be bothered finding out.

Getting back to the road and as we drove along we stopped off at the small war memorial with a lifebuoy printed HMIS Tonglang. The little bronze plaque was all in Thai, so was difficult to know what was being remembered.

We continued along the road retracing our original path. It was easy enough to follow the road back and we looked out for a place to eat. 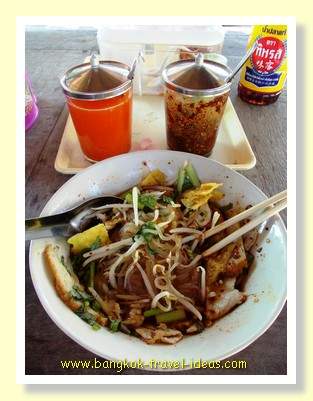 There were a number of small stalls dotted along the roadside and eventually we stopped at the one near the government buildings and opposite the hospital.

Choosing one of the seats in the Sala we ordered some noodles, meat and crispy shoots and sat and ate them in the warm morning breeze.

These dishes often come with pork or chicken and include a big piece of liver.

I am not that fond of the liver and it is easier to leave it, than to request it not be included in the serving.

Total cost was 90 baht including the two Cokes so you can see how cheap this place is. 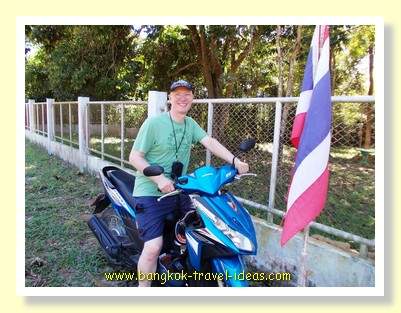 The next stop along the way was at the Tinkerbell Privacy Resort.

This place is located on a fantastic beach and is one of the places you can choose to stay on Koh Kood.

Every beach that we visited on Koh Kood seemed to have the same clear blue water and have great views along the shoreline, it would be hard to go wrong really when choosing where to stay. 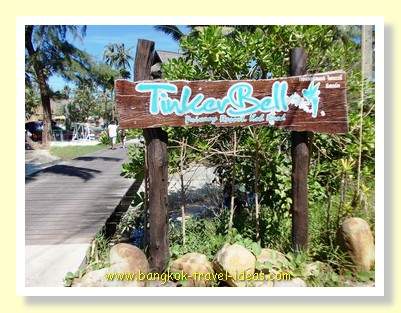 From here we headed back to the Dusita Resort to relax for the rest of the day.

Even though it was fairly brief, today's Koh Kood tour gave me an overall impression of what the place is like.

In fact most of the island is undeveloped and consists mostly of coconut plantations, but around the coastline there are of course the resorts.

There is very little traffic, some motorbikes and the odd pickup truck and I even saw some tourists on bicycles, although they were struggling to get up one of the hills.

Apart from one section of the road where about 200 metres had been washed away; the road was concreted and wide enough for two vehicles to pass. 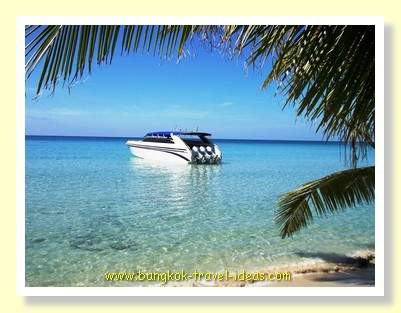 There were some quite steep hills along the way, but not as steep as those on Koh Chang.

I didn't notice any stores around the place, but there were little food stalls dotted along the side of the road and some places where you could buy gasoline for motorbikes.

The roads that we drove on were only about one third of the total roads on Koh Kood, so I still have something to explore on my next visit.

That evening we ordered some nice fish and chicken and coconut milk soup to celebrate the end of our stay on Koh Kood.

Continue reading about our return journey from Koh Kood to Koh Chang and what staying in Bailan was like.