Wat Asokaram is a fine architectural example of a Thailand Buddhist temple and it is located just 30 km from the centre of Bangkok.

As it is not on the general tourist route it makes a fine addition to your Thailand itinerary and makes a change from visiting the standard tourist places like Wat Pho and Wat Arun. 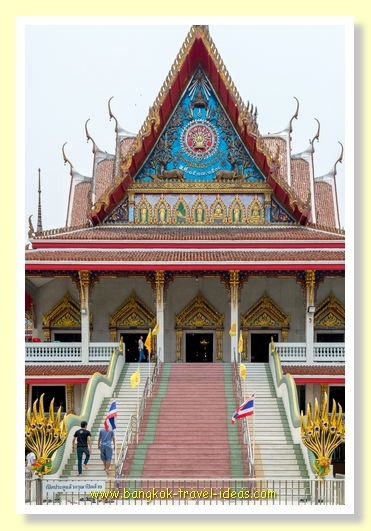 Go to Wat Asokaram at Songkran

For sure, your friends will not have been here. Even some Thais who have lived in Bangkok all their lives have never visited this temple, and when they saw my photographs they asked me where it was and were keen to go on a day trip. 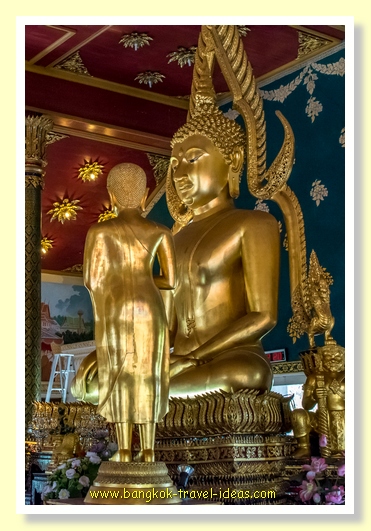 The temple of Wat Asokaram is located on the Gulf of Thailand on 15 Rai of land.

It is in the same general direction from Bangkok as the Ancient City and the Samut Prakan Crocodile Farm.

Keen photographers should plan their trip ahead to make the most of the ambient light as there are some amazing photographic opportunities in the grounds of this Buddhist temple.

It didn't take us long to drive to there and as we pulled into the temple grounds there were many cars parked by the side of the road with Thai families setting down to have a little picnic next to their vehicles.

Today was a religious holiday, so the temple was busier than usual as families came to make merit.

The sky was quite overcast when we arrived mid-morning and as it was early April it was quite hot and there looked to be a thunderstorm brewing in the distance. 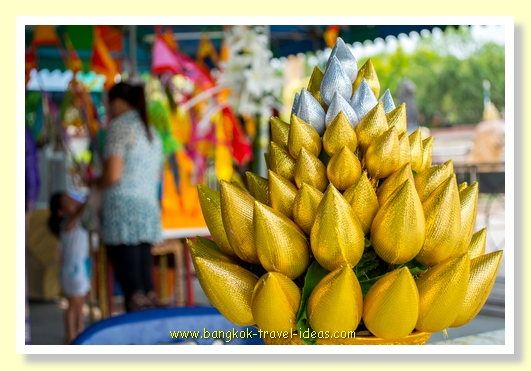 The Songkran period over April is one of the hottest periods of the year in Thailand. We parked the car and went up the steps to the temple to make merit.

I wandered around taking photographs of the interior and there were lots of other people doing the same.

Coming down the steps of the temple I lost my camera lens cap and a kind lady followed me to return it.

Outside under some tenting there were flowers for sale and some offerings for the monks.

I sat down here for a rest as it was really quite warm. A lady dressed in white robes came up and offered me a book and told me that here daughter was learning English.

The young girl was about 12 years old and a bit shy, but her mother made her practice her English on me. 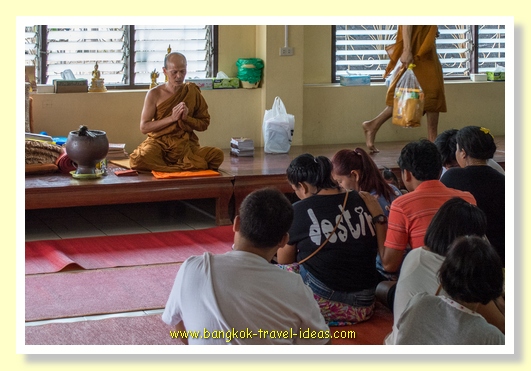 After a short while we bought one of the baskets of food that were on sale to donate to the monks and then all went into the ground floor of Wat Asokaram.

In the lower level there was a senior monk giving blessings to groups of people.

This lower part of the temple was quite cool and there was a good breeze coming through the doors.

The monk chants some words, the participants chant something back, and then you place the offering on a gold cloth and the monk accepts it and then return to your place.

The monk will then shower you with water from a handful of bamboo splints whilst giving a blessing and then there is some more chanting and then you leave and the next group takes their turn on the mat.

If you visit somewhere like Wat Pasi, then the chanting is written in English to make it easier to follow along. 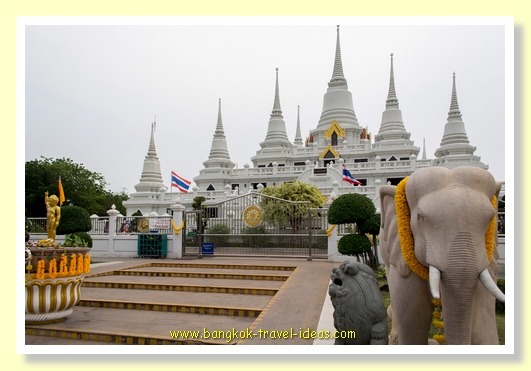 After the monk’s blessing was finished we went outside to visit the more impressive part of the temple grounds.

Directly opposite the Wat is Phra Thutangkha Chedi, which is a group of 13 white Chedis that represent the 13 duties of Monks on their religious journeys.

We wandered over to this very impressive building, took off our shoes and went in.

There were groups of monks putting up decorations and other groups listening to teachings.

Hanging from the ceiling were photographs of monks that had passed and this building holds the enshrined remains Ajarn Lee, the temple’s founder. 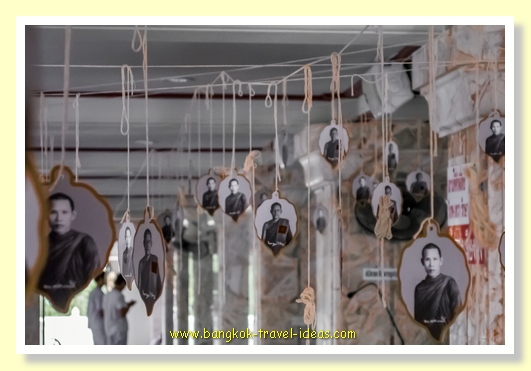 Wat Asokaram is one of the Thailand Buddhist temples that takes foreigners that want to experience the teachings of Buddha and we were told that some of the monks can speak English.

Wat Asokaram opened in May 1963 and the project to renovate Phra Thatangkha Cheddi at was commenced in 2013 by S. Boonmeerit Engineering Co., Ltd with a contracted cost of 46,000,000 baht. 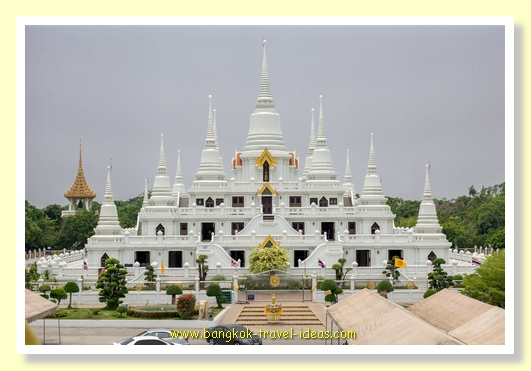 Looking down on the top of the structure it can be seen that there is one central large Chedi with four sets of three small Chedi leading to the four corners of the compound.

This design is not so obvious when you are looking at it front on, but altogether this accounts for the 13 Chedi.

Monks live in small kutis or huts in the mangrove forest at the back of Phra Thatangkha Cheddi and if you follow the small lanes you will reach the ocean path that leads to Bang Pu Seaside Resort on the left-hand side.

How to Get to Wat Asokaram